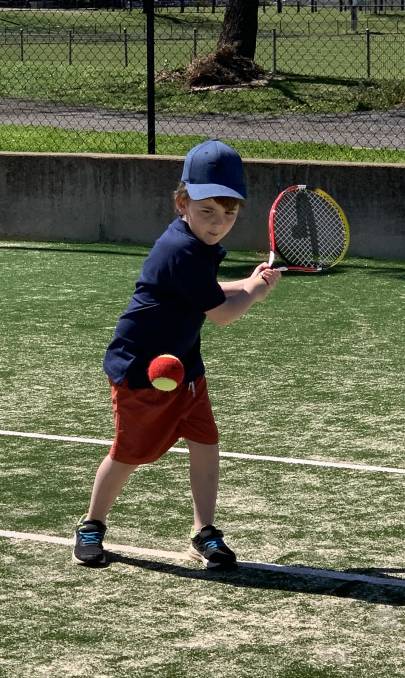 FOCUSED: Myles Baker is full of concentration as he has a hit at the Parkes Tennis Centre. Photo: SUPPLIED.

It's all happening at the Parkes Tennis Centre!

Rally4Ever is back and we are excited as October is Mental Health Month across Australia. Just like everyone has a level of physical health, everyone also has a level of mental health.

Parkes Tennis Coach Helen Magill has teamed with good friend Louise Pleming who is the Founder and CEO of the NFP organisation Rally4Ever. Through exercise and social connection our aim is to help people move4ever, learn4ever, laugh4ever and be mates4ever.

Helen is offering free sessions every Thursday 1-2pm at the Parkes Tennis Centre. Everyone is welcome and no tennis experience is necessary. Racquets are available to borrow. Enquiries phone Helen on 0407253888.

Excitement around the tennis centre this week when the junior programs were back for Term 4.

Tennis as a sport is extremely fortunate that by nature players experience plenty of social distancing - the only time they would come close is at the end of a match where they are instructed to tap racquets rather than shake hands.

Eliza Creith and Stacey Townsend were hitting the ball well and along with Sharon Hunt and Leanne Riley went through the night only losing one match each by the slimmest of margins.

Tuesday Mixed saw a maximum of eight teams taking part with limited courts available. Unfortunately we usually have 16 teams play so the first eight teams to register will enjoy their mixed tennis this term.

The Fulton Hogan Hackers came up against the unpredictable Wasted Potential. Brendo Weekes took on Hacker's Andrew Robinson and they had a cracking match on Line 1. Andrew just got the chocolates 6/4 in their singles.

Sadly for the Fulton Hogan boys, this would be their only victory of the night with Wasted Potential proving too solid taking all three doubles sets.

Earlier Joao Marrote had James Fisher running inside out chasing balls all over the court but couldn't finish him off in the end with James scoring a 6/4 win while Greg Magill and Jacob McNeil were seen having plenty of long rallies.

Greg eventually scored a 6/3 win to give Wasted Potential a 5 sets to 1 finish.

Full of Excuses took on Smash Hits and were victorious 4 sets to 1 with the final singles not being recorded.

Nice to have Team- Ben Evans, Lachy Tassell and Harry Dawson back in action again after a forced hiatus with uni and TAFE commitments.

They had a super tussle with defending champs One Hit Wonders. Ben defeated Maddy McCormick 6/3 which was Team's only singles victory although the boys combined well to win two of the three doubles.

James Beuzeville beat Lachy 6/2 and Nick Unger had a tough 6/4 win against Harry but it wasn't enough as Team snuck in for a two-game victory after the sets were tied 3-all.

Fulton Hogan Aces will have all the bragging rights at work this week as they scored a first up win.

Leading from the front was the experienced and technically proficient James Cain. James was looking confident on court and brushed aside the wily veteran Darren Fisher without the loss of a game.

Mitch Unger was subbing in for Full Metal Racquet and showed his class for a youngster with a controlled display against Aaron 'Tugger' Johnson.

Tugger was enjoying the challenge but fell short with Mitch winning 6/3. Tugger got revenge though when he teamed with both James and then Yolanda Forsyth to take both doubles sets and secure a 4 sets to 2 win for Fulton Hogan Aces.

The Aces will need to be at their best next week when they come up against defending champs One Hit Wonders so no doubt Team Captain Villella will be putting them through their paces on the practise court before releasing the team lists for round 2.

Luke Evans' appears to be cruising along in matches whilst opponents are frantically trying to find a way to win more games from Luke. He defeated both Andrew Slattery and Gabe Goodrick with the same scoreline 6/2, 6/2.

Maddy McCormick and Joe Tanswell had a great match with Maddy just scraping through in a super tiebreak after the match was tied at 1 set apiece.

Great to welcome newcomer James Cain to the A Grade singles challenge. James hails from Kiama and is in Parkes working for a while.

James quickly found his feet to surprise Gabe Goodrick in the opening match which went down to the wire with Gabe finally overcoming James' consistent play 11/9 in the super.

A relaxed James then defeated Maddy 6/3, 6/2. Joe also found his mojo in his second singles scoring a well earned 7/5, 6/0 win over Andrew.

All junior programs started on Monday with ANZHotShots featuring.

It was a delight to see all the smiling faces of the girls and boys aged from four years out on court.

There's a maximum of four in a group.

There are a few places remaining, check online at www.parkestennis.com.au and if you can't find a suitable day/time or group/lesson contact Helen Magill on 0407253888.

Please note court hire will be limited from 6pm Monday to Thursday as the night tennis events come back into play and the resurfacing project is sadly at a standstill.