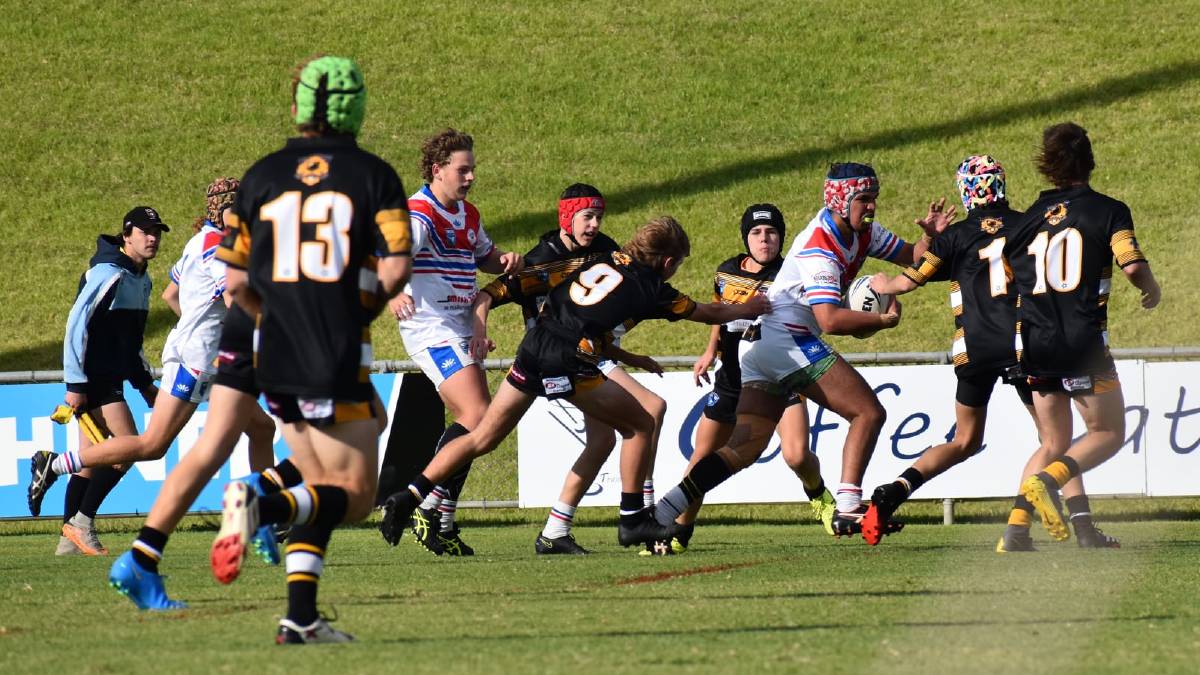 BIG EFFORT: The Parkes under 16's (pictured playing against Grenfell in round 3) had a good win against Molong last Saturday. Photo: Julie Herring.

Keanu Robinson started the day off with his great stepping skills leading to a try, he then went in with another great run before scoring in the corner. A massive full field run by Beau Thompson scoring a great try which then saw him kicking his very own conversion.

Great game by all boys out there you all tackled hard and ran your hearts out. Keep up the good work.

The Andrew Thomas Building U10's had some great runs from Cabonne that gave them an early lead to a try in the first two mins.

Carter Moran then made a strong run down the right hand side which led to a try by Jack Robinson. Jack converted his own try and the score was tied at 6-all. Leon Spicer, Jacob Gosper and Ollie Monkerud were fantastic in defence, but Cabonne were too strong and scored, taking the score to 10-6.

A good offload by Jack saw Parkes gaining momentum and Carter then put in a great kick which was caught by Brax Mulligan - who was millimetres from scoring. Ari Albert tackled relentlessly, but Cabonne scored two tries in succession taking the score to 20-6.

A brilliant offload by Carter saw Jake Goulthorpe make 40 metres in a huge run. Cabonne then scored right on half time to lead 24-6.

Parkes had an awesome start to the second half with a solid run by Brad Nash. Jamison Lee then scored in the left corner and converted his own try.

Again, Ari Albert made two great tackles in a row. Cabonne then scored three consecutive tries, taking the score to 38-12. Parkes did not give up with Ari scoring a brilliant try and converting the goal. Harvey O'Keefe ran hard, making some great metres.

Final score was Cabonne 38 to Parkes 18.

K & H Earth Moving under 12's had a cool start on Saturday morning, travelling into an icy Molong to take on Cabonne.

The Roos are always an unpredictable team and the boys had a back-and-forth match throughout the first half. Defence was working really well and the effort the boys have been putting in at training really showed this weekend. Hamish Mcgrath with his 'eyes up' footy had control of the middle and at the break the score was 12-6 to Parkes.

After half time, the boys set about putting some points on the board and with Riley Fernando leading the way at first receiver, the ball runners were all very organised.This week saw outstanding defence from Jayden Kunn, Tyrece Robinson, Kallum Munday and Mason Oram. Parkes eventually took the win, with score finishing 28-6.

This weekend the under 12's are playing twice, with the first game at 9:50 against Condo Gold and second game (top of the table clash) at 12:45 against Condo Blue

Hope to see everyone there...bring on the good weather!

The Brian Collins Smash Repairs/Agriwest under 16's had another solid win last Saturday in Molong against Cabonne. Opening the scoreboard for Parkes was Joe Monk after teamwork saw the boys drive the ball quickly to the line. Conversion was unsuccessful and Parkes had the lead 4-nil.

A kick from Cabonne went dead, resulting in Parkes attacking from the half-way line. Ball passing and a strong drive from Joe saw Ollie Thomas do what he does best and drive that ball over the line to score. Conversion by Marley Moran saw the lead move to 10-nil.

Cabonne obtained possession after Parkes couldn't finish a set and the defence fought hard with big hits from Dustin James, Jay Arrow, Mac Rauchle and Charlie Mahon. Reece James protected his wing while Kane Coulston protected the other side.

Jack Jessop and Toby Cox worked together to stop Cabonne in their tracks. A few penalties allowed Cabonne to move closer to the line and continue the attack. They didn't stop until they found a gap to score and successfully convert.

Parkes hit back with a strong run from Kaid Lydford from the kick then Jackson Parker-Lee and Tye Toomey found a gap to put the ball down. A successful conversion by Marley gave Parkes the lead 16-6. Cabonne were able to take possession after the set and they split the line of defense running full field to score, which took the score to 16-12 at half time.

The second term saw a very determined Malakai Folau strike back and hurt the opposition where it hurt the most, scoring three amazing tries, tearing up the sideline and through the Cabonne defence. Conversions were successful by Marley and Malakai to take the score to 32-12.

A lost ball from Parkes saw the fresh faces from the bench have their turn to get involved with tackles; with Jake Herring and Jimmy Osborne supporting Kaid Lydford, Bob McEwen, Ollie Thomas, Mason Leedham and Marley Moran.

Parkes took the ball back and after strong runs and passing Tye Toomey finished the next set scoring and Toby Cox put the final points on the board with a successful conversion.

The game was called off a few minutes early but Parkes had won 40-12.

The girls all looked strong in attack with Grace Fernando, Ayesha Carruthers, Kasey Morgan and Jorja Hetherington making many breaks throughout the day, getting the team closer to the try line. Charli Milne scored the first of her five tries, 3 minutes into the game. With the team continuously working the edge, Corby Fliedner was able to find some space out wide to score her first of two tries. Haylee Lewis, Miley Duff and Hayley O'Malley were great out wide in defence. With a quick play the ball, Miley Nash zig zagged her way to the try line.

The under 14's Bob Skinner JLT team played Molong in a very close game but Parkes walked away with the win 24-18. Grace Milne scored three tries and Kailen Butt converted one of those. Grace MacGregor also scored. The score was 18-18 with only five minutes to go until full time and Grace MacGregor got a break and scored her second try under the post and it was converted taking us to the lead.

Jade Coulston got player of the match this week.

Lost 18-4 with Macy Morrison scoring the only try.

A special round this weekend

This Saturday, Condobolin and Parkes Junior League Clubs will come together to remember Malcolm Buerckner who tragically lost his life in 2006. Malcolm was our under 10's coach and his son Jack was a part of the under 10's team that year.

Our under 10's will be wearing red Socks, which is only fitting as Malcolm was an avid St George Dragons fan, and the winner of that under 10's game against the Rams will see the winner receive the Mal Buerckner Memorial Trophy.

Malcolm grew up in Condobolin and played all of his junior football for the Rams. This year the game will be all the more special, with Malcolm's nephew Eli playing in the Condo side.

It is Parkes' honour to have Malcolm's family Debbie Grady and Sonia Buerckner attend on Saturday to help us remember his life and all he gave to rugby league in the region.