The District and Pennants games continue throughout our area, with mixed results showing up. Good effort by all our members.

Social bowls numbers are down as a result of all the travelling.

The greens are in top shape - thanks Ground Control.

Next week several teams are travelling to Canowindra to contest the District Pairs. Good luck everyone.

Our club's 100th anniversary dinner is on soon! Saturday, April 17 at 7pm. $50 for a three-course dinner and entertainment by Amitie! Tickets at the club or 123 Tix.

Make up a table and come along! Surely 100 years of bowling is worth celebrating!

Last Wednesday we had 20 players attend.

Thanks again to Parkes Caravans for putting on this event.

Easter Monday at short notice, Paul (BUGMAN) Lewin and Phil Barnard put on a day with $200 prize money and pizzas afterwards. The format was two games of 12 ends with 28 bowlers attending, great effort, a full green!

Wednesday we had 22 players with four games of pairs and one of triples.

In a game of Minor Singles played on Wednesday, Dawn Parker took on Trisha Allen. This was a very close game until Dawn felt ill. Trish winning 24/14 with Dawn pulling out.

Saturday, April 17 the Sevens will be going to Orange city to play off for the state finals.

A couple of championship games being played this weekend. Saturday Triples: Tony Bright vs Ben McNaughton, Fours: Tony Peisley vs Peter Creith. Sunday: Col Boehm vs John Corcoran. All at 1pm. See you there, TOOT TOOT! 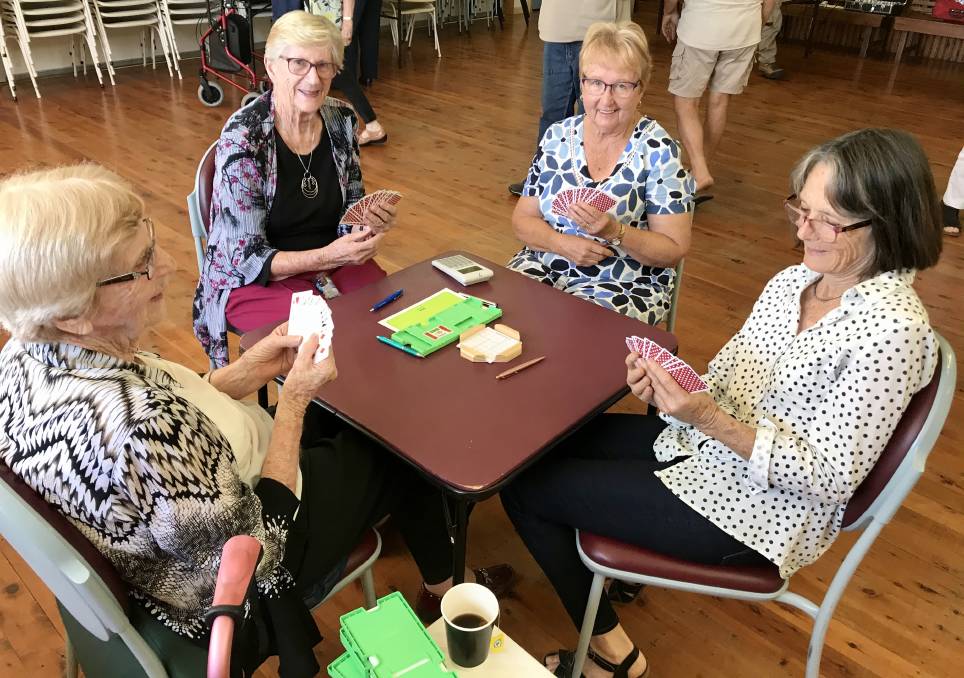 BRIDGE: Working out what to finesse during their games last week were Val Worthington, Jenny Freeman, Laurie Keane and Barbara Hughes. Photo: Submitted

To finesse or not to finesse... that is the question.

Finessing is a great technique by which you can make an extra trick if a high card is held in the right opponent's hand. Some say never to try a finesse unless you must have that extra trick in order to make your contract.

A statistician will tell you that a finesse will work fifty per cent of the time (unless a clue in the bidding suggests otherwise). A bridge player, however, will invariably tell you that their finesses almost never work.

This week's smart players, who knew when to and when not to finesse were:

If you want to learn about the art of finessing come along to the Parkes Bridge Club on Tuesdays and Thursdays at 1pm and Mondays at 6.30pm at the Lutheran Church Hall in Currajong Street.

Last weekend saw five shooters attend the Deep Lead Shooting Complex on the Back Trundle Road and shoot at ordinary targets at both 25m and 50m for a maximum of 550 points.

Popeye had a little screw loose on the day which has now been corrected. Sometimes a public holiday works but on this occasion it did not.

Out next shoot is at 1pm on Sunday, April 11 and will be an animal target at both ranges.

Lots of puppies on April 3 at the Northparkes Oval Parkrun.

This week 62 people ran, jogged and walked the course, of whom 28 were first timers and 14 recorded new personal bests.

There were also representatives of three different clubs who took part.

Northparkes Oval Parkrun started on February 6, 2021. Since then 247 participants have completed 548 Parkruns covering a total distance of 2740 km, including 150 new personal bests. A total of 37 individuals have volunteered 102 times.