If you'd told me a year ago that my morning flat white on deck would be accompanied by the first officer pointing a digital thermometer at my forehead and checking my oxygen level, I'd have been most puzzled.

But daily temperature checks are just one aspect of cruising I had to get used to on my first post-lockdown cruise, exploring the Peloponnese on Variety Cruises' 49-passenger Galileo.

It was a small price to pay for a blissful week in the Greek sunshine in August.

Believe me, I know how lucky I am to have the freedom to travel again. I've been on two trips since the UK Government agreed on so-called air bridges with a handful of other countries: one to Spain, staying in an Airbnb in Andalucia, and this most recent visit to Greece.

Travelling again has been indescribably exciting; things that were once mundane, like boarding an aircraft, have filled me with joy. There's a sense of everything being familiar but at the same time, different. Here's a glimpse of my experiences so far. 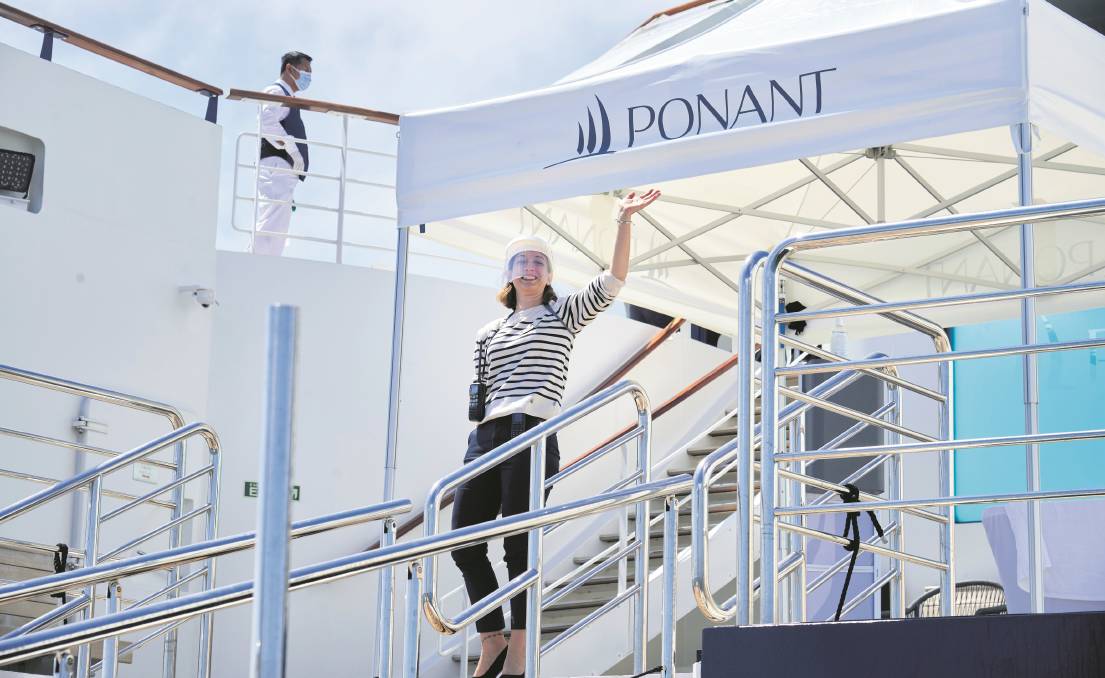 Cruising is still possible with COVID guidelines in place.

Greece and Spain are very strict. You fill in a form with every detail of your forthcoming trip for track and trace, should it be necessary, and are sent an email with a QR code. No QR code and you can't board the flight. When we arrive in the southern Spanish city of Malaga, we are temperature checked and our codes scanned.

Athens is even stricter; a random selection from each incoming flight is carted off for a COVID test, the results arriving by text within 24 hours. We weren't picked but just in case, we'd booked one night in the Amarilia Hotel on the beach in Vouliagmeni, the Athenian Riviera, where I learned that the "new normal" in hotels is similar, not surprisingly, to that on ships.

Masks everywhere. Press the lift button with your elbow and only board the lift in your social bubble. Hand sanitiser on tap. Point at what you want from the breakfast buffet. Scan QR codes for online menus.

Wearing a sweaty mask in the heat is a bore (mask acne is not the best look to take home) but in both Greece and Spain, everybody complies. Perhaps this is related to the fact that both countries had really tough lockdowns.

Spanish friends snorted when we told them of long bike rides along the Thames and visits to pop-up beer gardens during Britain's confinement. They were allowed to go shopping once a week and had to show a receipt to prove that they'd made a decent effort. Greeks had to apply via an app to leave the house. Expect staff in personal protective equipment. At least the clear visors mean you can see their smiling eyes.

As such, locals are understandably sensitive. People on the beach get twitchy if you set up camp too close; indeed, some had marked out generous plots for themselves with little green flags in the sand.

Spain has banned cruise ships indefinitely but Greece is back in business. Variety Cruises was first to set sail with international passengers and, when I travelled on its fourth cruise, still happily incident-free.

Our merry band of 31 passengers came from Germany, France, Spain and Greece. We were all issued with smart navy cotton masks to be worn around the ship. The crew wear plastic visors, so you can at least see their faces.

All around the ship are little signs saying "PureSpace". This indicates an area where the $4000 PureSpace machine has been wheeled out to disinfect everything from soft furnishings to the actual air with a non-toxic, virus-busting spray.

A second machine, which emits UV light and also kills off bugs, operates alongside the PureSpace gadget. I was so impressed I bought my own UV light.

Apart from lashings of hand sanitiser around the ship, constant cleaning of the watersports gear and the daily temperature check, everything felt normal. There are still buffets, but waiters serve you. Buffet shame is a new concept - it's hard to say to the server, "Just pile it high, mate".

We still sat at the bar to drink gin and tonics. We still jumped off the ship's ladder into the warm, indigo Aegean, and sat on beaches (with umbrellas carefully spaced). We did one excursion, to Delphi, which was empty and as such, exquisite, the ancient stones glowing in the soft morning light, not a selfie stick in sight, chirping cicadas and the wind in the pine trees the only sound.

To avoid mixing with different local guides, Variety Cruises carries its own guide, Eugenia Alexiou, an archaeologist, who was excellent. COVID-safe sightseeing in the great outdoors with luxury line Ponant.

This cruise was half-board so on several nights we went out for dinner in port, sitting in restaurants with tables 1.5 metres apart. Most voices we heard were Greek and towns like Nafplio and the gorgeous port of Pylos were buzzing, although Katakolon, which depends heavily on cruise ships, was completely dead.

One night, the crew laid on ouzo and platters of octopus on the sun deck and a local dance troupe came on board to entertain us. It was their first performance since February and they were clearly absolutely thrilled to be back, although the inevitable audience participation for Zorba the Greek had to be done in family bubbles.

Despite all these measures in what I consider to be a safer environment than some beach crammed with boozed-up Brits, in going to Greece I defied the British Foreign & Commonwealth Office's (FCO) advice to avoid all sea-going cruises.

It's a bizarre ruling. River boats much larger than Galileo are acceptable to the FCO; the mere fact that the ship goes to sea, rather than along the Rhine or Danube, makes my government equate the risk of a cruise to, say, a minibreak in Iraq.

Luckily, there are a couple of insurers in the UK that will cover travellers going "against FCO advice" (which, to be clear, is advice, not a legal requirement).

Did I feel nervous? I do admit a lot of "what ifs" ran through my mind each day when Vasso, the first officer, approached with her digital thermometer; 14 days' quarantine in a Greek hotel would have been dismal.

There's a tendency to jump every time somebody coughs and fire them an accusing look. There's the concern about further quarantine becoming mandatory back home with no notice. But this is a risk every traveller takes in this strange time.

Would I take that risk again? Absolutely.