It all started with a South American sausage truck, an orthodontist and a fire, which threatened to destroy everything before a single meal was even served.

Just days before Carevan was set to serve its first meals, the charity lost everything.

In March 2010, the shed storing all the organisation's equipment was completely ravaged by fire.

Everything volunteers had scraped together from donated dollars and cents since the charity formed in December 2009 was destroyed. Nothing but ash remained.

Not even the $20,000 repurposed South Amercian sausage food truck, which was yet to be insured, was spared.

It was a baptism of fire for founder John Brabant.

The orthodontist had been inspired to do something after reading an article on homelessness, It is easier to turn away than to care by then-Border Mail journalist Kristy Grant.

At the time, Dr Brabant described the story as "the spark for what became a life-changing experience."

But when the real spark occurred and oily rags used to paint the food truck combusted in the summer heat, he wasn't prepared.

It would have been easy to walk away, to look upon the tattered and tarred remains of a dream and feel nothing but exhaustion and sadness for what could have been.

But that's not how Dr Brabant works. By 2010 he had already survived cancer, several heart attacks and a coronary bypass.

He knew the determination and grit needed to rise from the ashes, and he knew it was not possible without support.

In the shadow of the flames the community rallied and a new caravan was donated, while people stepped up to help the organisation rebuild.

Almost a decade on, Dr Brabant is philosophical about the Carevan's inauspicious origins.

"It was good in some ways," he laughs. "It gave us a chance to set up systems and train volunteers so we could be professional and it did give us publicity."

Despite the paint fire, Dr Brabant didn't shy away from decorating the new van.

"I wanted the van to be brightly coloured and in everyone's face," he says. "To show that poverty exists and you do have to care or turn away."

By May, the second Carevan was out serving hot meals to those who needed them.

But the service, which is preparing to celebrate the 10th anniversary of its first meal service, has always been about much more than food. 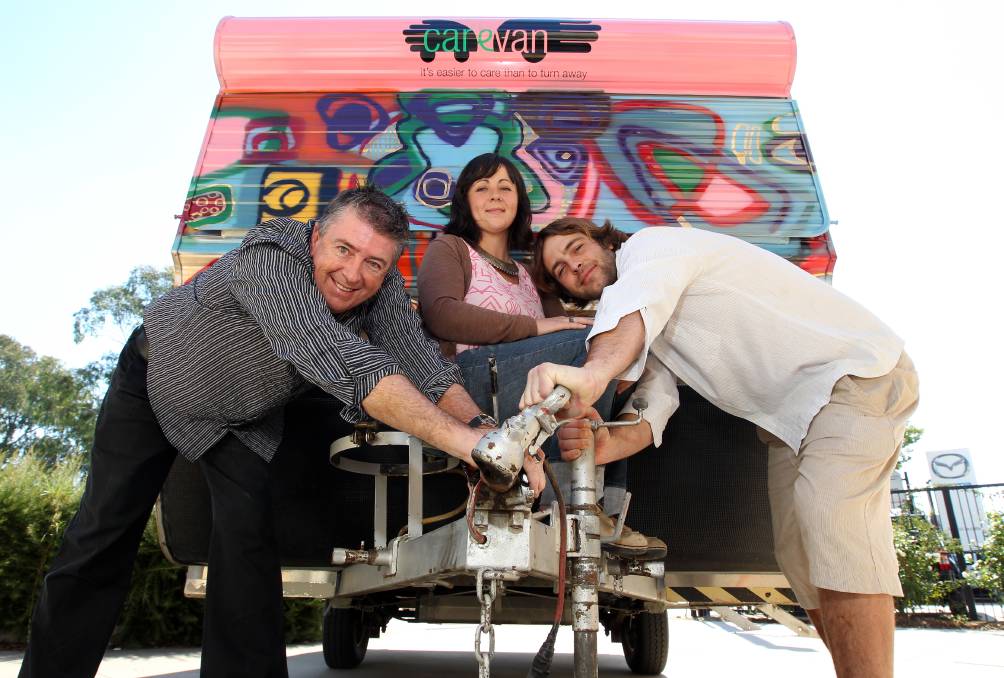 REBIRTH: Carvan Foundation founder John Brabant in 2010, with artists Niki and Mark Wood who helped decorate the second Carevan, after the first van was destroyed by fire.

Since May 2010, Carevan has distributed 5000 care packages, 5500 schools lunches and ensured 5000 primary schools students have received dental care. More than anything else, Carevan has supported people to rebuild.

Long-time volunteer and Carevan director Dave Gleeson says at its core the organisation is about connection.

"The meal is only a small part of it, it's a mechanism that helps create a sense of community," he says.

"You're not just there to serve a meal, you're there to connect with people."

Carevan is non-judgmental, non-denominational and non-political.

"It's not so much the meal, [people] look forward to getting out there, sitting down with other people and having conversations," Dr Brabant says.

"It's about social inclusion, social awareness and giving those people who are less well-off a sense belonging and identity ... a lot people lose that sense of identity."

That spirit of openness and equalness transforms Carevan benches into family dining tables - places of support where concerns can be voiced and laughs enjoyed. "There's a real sense of community," Mr Gleeson says. "If someone hasn't turned up to a meal service for a couple of weeks you can ask where they've gone and someone will know... there's a network of people caring for each other."

Mr Gleeson says because of that trust regular clients tell volunteers about people they know who need support and Carevan can act as a referral service.

The organisation's knowledge of the region's support services allows them to direct people to housing or domestic violence support.

Together the organisations aim to create wraparound support for people.

Dr Brabant is modest about what he has achieved through the creation of the organisation, passing all credit for success to the people who make up the charity.

"It's a community owned concept and it revolves around a wonderful army of volunteers," he says.

"I just provided a medium...It's the volunteers that make Carevan successful, they give their time and companionship and friendship to people who need it.

"It's grown way beyond my expectations.

"It's gone from Albury-Wodonga to Wangaratta then Griffith, Blacktown in Sydney, recently Wagga, and even this morning I got a call someone in Leeton wants to start one." And it's clear from Carevan's sole employee Leanne Johnson, who took up a job as project officer after three years volunteering, that the organisation has lost none of its ethos over time.

It might be easier to turn away than care, but there's no referring and forgetting at Carevan. Even when she's off the clock, Ms Johnson is always looking out for those who might be struggling.

"We don't know anyone's situation," Ms Johnson says. "Don't think for a minute you can't hit bad times, because you can."

The former childcare worker says Carevan doesn't "write people off", and that's where its power lies.

"I just think what can I do to make someone feel good in themselves, in childcare terms, to make them have that fuzzy feeling inside," she laughs.

The Kids Cooking and Caring Program allows year 9 students across eight schools to learn valuable hospitality skills while preparing Carevan meals under the tutelage of Miss Amelie's David Kapay, as well as developing their social conscious. ABOVE: Carevan director Dave Gleeson, pictured with piles of donated frozen pork, says the charity is based on generosity. Picture: MARK JESSER

In the beginning, not everyone supported Carevan and Dr Brabant attracted criticism.

"People also said that people who don't need food would come, but I didn't care about that because if it could help change one person's life then the whole concept was worthwhile to me."

But Carevan didn't just change one life... it changed the lives of hundreds of volunteers, thousands of school children and countless isolated people.

It supported clients as they bettered their lives, channeling the same tenacity and determination that saw Carevan itself rise from the ashes.

It changed a community, creating connections so people can't turn away.

This story A South American sausage truck, an orthodontist and a fire first appeared on The Border Mail.