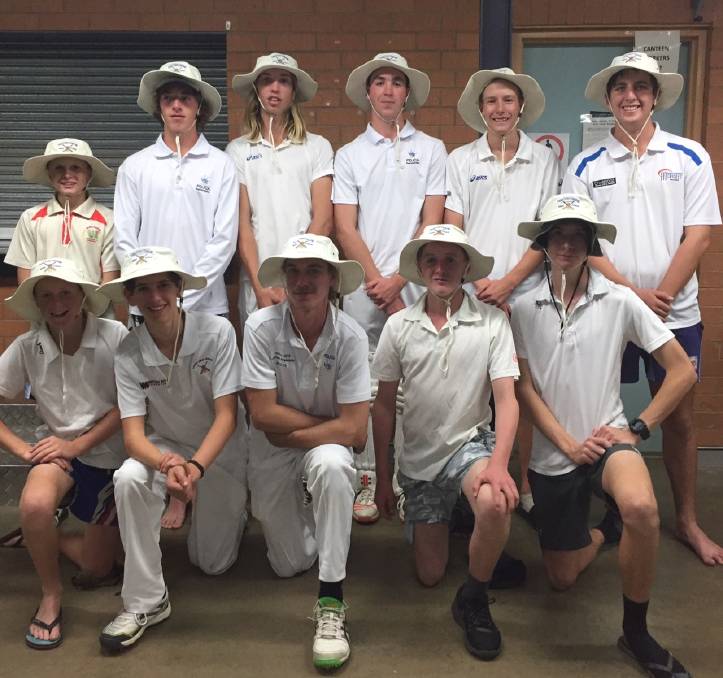 The u14 teams have been fortunate to have experienced top line senior cricketers in Clinton Hawke, Phil Dunford, Graeme Bayliss and Graeme Tanswell to guide them in 2017/18.

Waughs coach Shane Jones should be very pleased with his team as they have had somewhat of a form slump in recent weeks before playing to their best in the last two weeks in the semi-final and final.

Presentation Ceremonies: Two well attended Junior Cricket Presentation Ceremonies were held following the P.D.J.C.A. Finals. After the thrilling u17 final on Friday night the following awards were presented – The Kevin Klein Memorial trophy for the Parkes under 16 representative player showing achievement and sportsmanship in 2016/2017 – Ryan Dunn.

Ryan represented Lachlan Cricket Council in inter-council matches, then went on to be a member of the Western Zone u16 team that were runners up in the NSW Country Cricket u16 Bradman Cup Carnival held at Bathurst in January 2018.

Scorers award to scorers who have returned neat, accurate and complete scorebooks – to Sandra Hessel and Sonya Ruzgas.

Presidents Appreciation Awards – to Parkes players who have been involved in representative and local junior cricket from u12s to u17s – Jonah Ruzgas, Jared Carty, James Mackenzie and Nick Mackenzie. Parkes/Forbes/Condobolin Premiership hats to – the McGrath’s team.

After the u14 and u12 Finals on Saturday morning another Presentation Ceremony was conducted at North Parkes Oval for u14, u12 and u10s. The following awards were presented – Miniature cricket bats to each member of the Parkes u10 teams – Lyons, Trumpers, Benauds and Davidsons.

The Peter Chambers Memorial trophy for sportsmanship and achievement in the Parkes under 14 Representative team – to Harry Bayliss.

Harry has represented Lachlan Cricket Council in inter-council fixtures and at the Max Shepherd u14 Carnival at Dubbo, before being selected to captain the Western Zone u14 team that won the NSW Country Cricket u14 Kookaburra Cup Carnival at Armidale in January, 2018.

This team then went on to soundly defeat the legendary Sydney based team – North Shore at Campbelltown in February in the City versus Country Challenge fixture.

The Joy Skinner Memorial trophy for sportsmanship and achievement in the Parkes under 12 Representative team – to Ryan Dunford.

Ryan not only achieved a series of good scores while playing for Parkes, he also gained selection in the Western PSSA Boys Cricket team that played in Orange in November 2017.

The Nic Fisher Memorial trophy for enthusiasm and improvement in the Parkes under 12 Representative team – the trophy was presented by Carly Jayet to Harry Jones.

Harry represented the Lachlan u12 team that played inter-council representative matches in 2017/2018.

The Keeghan Tucker Trophy for Encouragement to a female cricketer – to Maddy Spence.

Maddy not only played very well for the Parkes u12 representative team in 2017/2018 but also gained selection in the Lachlan Cricket Council u12 team that played inter-council fixtures in 2017/2018.

To top this off Maddy played for Western PSSA Girls Cricket Team in Maitland in October/November 2017 before gaining selection in the NSW PSSA Girls Cricket Team that played in the School Sports Association Cricket Carnival at Barooga in January, 2018. Brent Tucker was on hand to present this prestigious trophy on behalf of the Tucker Family.

Each of the perpetual trophy winners were also presented with a replica trophy to keep and commemorate their award.

Best and Fairest Certificates for the players in each team in under 14 and under 12 – Harry Bayliss (u14 Chappells), Joseph Tanswell (u14 Lilllees), Harry Jones (u12 Waugh’s), Jack Milne (u12 Gilchrists) and Geordie Duncan (u12 Pontings).

Best and Fairest trophies for the overall winners in each grade – to Harry Bayliss (u14s) and Harry Jones (u12s).

Presidents Appreciation Awards for people who have contributed to the successful functioning of PDJCA this season – President Anthony Ruzgas made special mention of long time Honorary Secretary Greg Morrissey who was awarded an Order of Australia Medal on 26/01/2018 for his services to cricket and the Parkes Community.

Mr Ruzgas then presented a gift card to Shane Jones for his whole hearted efforts in coaching and organising under 12 cricketers.

Premiership hats to under 14 and under 12 Premier teams – under 14s – Chappells and under 12 – Waughs. The raffle for P.D.J.C.A. was drawn at the end of the Presentation Ceremony and the winners were –

Any team managers who have yet to return their team kits from the 2017/2018 season contact Association Secretary Greg Morrissey 0428 963 605.

The Executive of Parkes and District Junior Cricket Association extends best wishes to all and trusts you have enjoyed the recently completed season.