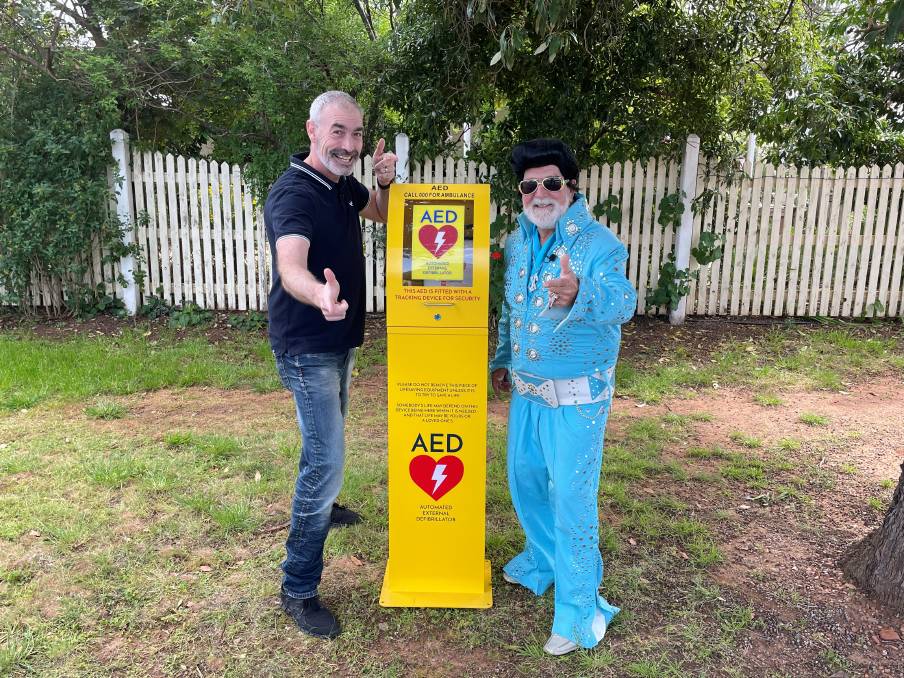 YOU BEAUTY: Greg Page and Parkes Shire Mayor, Cr Ken Keith OAM with one of the AED boxes in town. Page has fourth-largest collection of Elvis Presley memorabilia in the world, hence the suit. Photo: SUPPLIED.

It can happen to anyone.

Anywhere, at any time.

And if someone goes into cardiac arrest, there is one device in particular that can save their life.

The Parkes Shire Council recently announced a collaborative project with Heart of the Nation, a charitable initiative set up by Greg Page.

Sudden cardiac arrest is a medical event that can strike anyone, anywhere, anytime - it happens to around 27,000 Australians every year - and tragically, 90 per cent of people do not survive.

The appropriate response to treating cardiac arrest relies heavily on bystanders implementing three simple steps, which is known as the Chain of Survival - CALL, PUSH, SHOCK.

When someone is in cardiac arrest, they will not be responding to sound or touch - this is the time to CALL 000.

If they are not breathing normally, or at all, it is then time to PUSH by starting CPR, whereby you'll need to be pushing hard and fast in the middle of their chest.

The next, and possibly most crucial thing that can give the person the best chance of survival, is to provide a SHOCK delivered by an AED.

In cases where an AED is used within three minutes of someone going into cardiac arrest, the survival rate can increase to around 70 per cent.

You cannot overstate the important of an AED when it comes to a cardiac arrest.

Someone in cardiac arrest who receives a shock from an AED prior to ambulance arrival has around twice the chance of surviving their cardiac arrest than someone who has to wait for an ambulance.

Mayor of Parkes Shire, Cr Ken Keith OAM, said having AEDs available in the Parkes community was a brilliant initiative.

"Given the fact that around 80 per cent of cardiac arrests happen in the home, council is pleased to announce this initiative that places AEDs within a much closer proximity to many more residents," he said.

"Over the coming weeks, council will commence the installation of the units and you will start to see these bright yellow tower stands popping up in various locations throughout the Shire.

"These will house the AEDs and are designed to be bright to ensure high-visibility so that people know where to find an AED when it is needed," said Cr Keith.

- Let's Pink Up Parkes in January, instead

Greg said that if the worst happens, and a friend, family member or member of the public goes into cardiac arrest, anyone can use an AED and hopefully save the individual's life.

"An AED is simple to use, and requires no training, qualification or certification to try to save someone's life," he said.

"However, Heart of the Nation will be organising several community CPR and AED user training sessions for our residents to take part in (either virtually, or in person when restrictions allow) so that more of us are prepared to respond in the most appropriate way, and with confidence.

"Access will also be provided to an app which will help to identify the location of the new AEDs, as well as existing AEDs in Parkes that are already a part of the Heart of the Nation network.

"For those businesses, community groups or individuals that already have an AED, you are welcome to become a member of the Heart of the Nation network - it's free, and it will help people identify the location of your AED if it is needed nearby your premises," said Greg.

As many would know, this is a cause close to Greg's heart, after he required three shocks to his heart from an AED following a cardiac arrest while he was on-stage at a Bushfire relief concert with the Wiggles.

An AED saved his life, and you can see why he wants to save others, having personally experienced the sheer importance of the devices.

The AEDs will be in cabinets that are unlocked, so that they can be accessed rapidly when needed, and are fitted with tracking devices, so we know where they are at all times.

But this does not mean they are not at risk of theft or vandalism.

As these are a community asset, and designed to save lives, they can only do so if the AED is in the cabinet, and in working order when needed.

Cr Keith said it was fantastic that Parkes has been chosen as an area for the trial, but encouraged the entire community to make sure it was used in the right manner.

"We encourage the assistance of the community to ensure that any theft or suspected theft, or vandalism of the AEDs or the cabinets is reported to the Council offices," he said.

"Thank you Greg for selecting Parkes as one of the first local government areas in NSW where this project will be rolled out.

"It is a fantastic initiative, guided by a desire for better outcomes for people that experience sudden cardiac arrest, whether it be in the home, at work, or in public places," said Cr Keith.

A fabulous initiative of course, but are our smaller towns missing out?

Trundle, Tullamore and Bogan Gate, in particular, don't have the same access to emergency care, and having an AED readily available could quite literally be the difference between life and death.

"The recommendation (when the trial was originally approved by council) was to install in the shire not just Parkes, so they are shared," she said.

"The likes of Trundle and Tullamore don't have an ambulance service on their doorstep, is there a possibility of a unit in those towns?"

In reply, managing director Kent Boyd said the council could potentially look into expanding into these towns, though it would appear it would have to be at the council's expense.

"Our sponsor wants them to be put in post boxes in Parkes as a trial, but we could looking into funding extra ourselves for the towns as a council," he said.

Stay tuned to the Parkes Champion Post for any updates on AED locations.