We have two female toggenburg goats, Gerty and her daughter Jilly Love Face, who live with us on our three-quarters-of-an-acre urban block.

Our main incentive to have goats was to access ethical dairy. But that doesn't mean I think everyone should run out and get dairy goats - it's not for the faint hearted. They're very real, big, beautiful animals that need a lot of attention. For most people it may make more sense to just spend a bit more and buy organic, ethical dairy.

But for anyone interested in giving urban goat keeping a go, you might find this article helpful.

The two breeds I know of that are appropriate for this type of goat keeping are toggenburgs and saanens. We have toggenburgs.

But you can never have just one goat - you have to have at least two, otherwise they can get depressed (seriously). And no, having chickens or other types of animals doesn't replace the company of another goat - it has to be another goat.

Our goats don't free-range across the whole property, as we have extensive vegetable gardens and large orchards they would destroy, instead we tether them around the garden at key points where they can eat grass and shrubs. We also take them for little walks down the local bush track. Walking them can take two people because if they get spooked by a car they can really run.

If you have small kids of the human type, watch them around the goats, as they like to head-butt things that are smaller than them.

We harvest weeds from here and occasionally allow them to graze there (with us); chop and feed them fresh prunings from our weedy windbreak (featuring cotoneaster and pittosporum trees); and also tether them around our garden on a four-metre chain in key areas where they can eat grass, herbs and shrubs - but not our food crops.

We also grow fodder trees for them, including silver wattles and tagasaste (tree lucerne) that have self-sewn on our land.

There's an extensive list of plants goats can and can't eat at fiascofarm.com/goats/poisonousplants.htm. 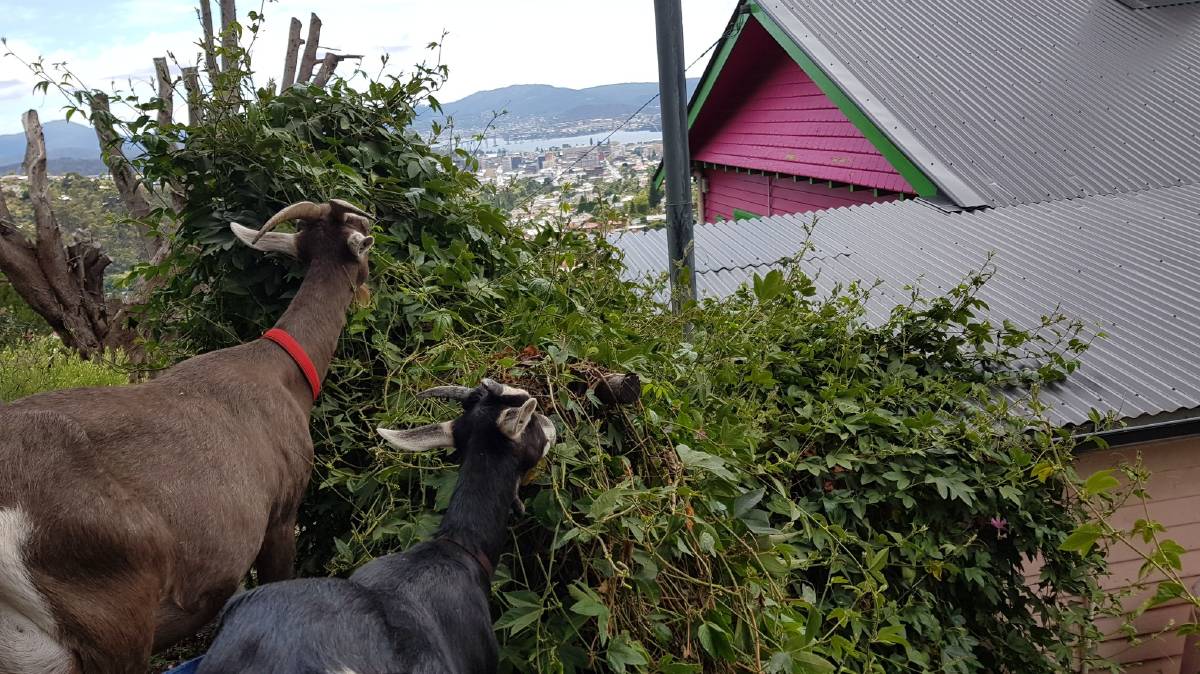 Gerty and Jilly are often tether around the garden at key points where they can eat grass and shrubs. Picture: Hannah Moloney.

A mineral lick is permanently available in their shed and includes 16 ingredients ranging from copper, calcium, phosphorous, bentonite, iodine, iron and more. We also add seaweed meal to their feed occasionally.

Interestingly, goats don't eat everything. They're incredibly fussy eaters and I spent a load of time working out their diet for our urban context. Our monthly feeding fee is around $70 per month - down from $150 after we stopped buying in feed bales as the goats weren't eating them. Instead they have a chaff and barley mix with fresh fodder.

The yard and milking shed

Our goats permanent yard is approximately 70 square metres, which includes their shed. Importantly, we make sure there's always a thick layer of woodchips or straw on the ground so there's never any risk of them being on bare soil or mud.

They have timber pallets and logs for them to run and jump on, as goats will get bored if they don't have an obstacle course to play on. This yard could be considered a bit small if that's where they spent all their time. But we walk them and tether them around our garden, so they get a lot of diversity. 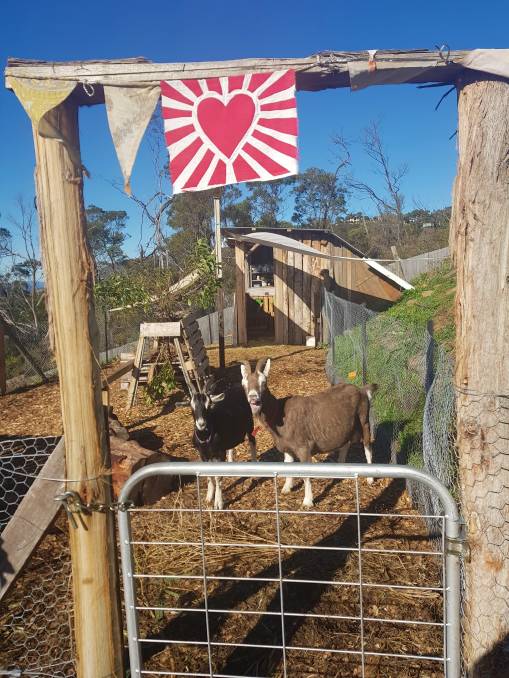 Jilly and Gerty in their goat yard. Picture: Hannah Moloney

We don't have an electric fence, just standard wallaby fencing with star pickets, which as been mostly fine - with one exception. When Jilly was on heat she somehow got out (goats turn into lunatics when their on heat). We assume she jumped the fence.

We built the shed from recycled timber, timber flitches and other materials including relocated slabs of concrete from our garden - this forms the floor (which has straw on top).

The shed has three sections: the general hang out section, including milking stand; the food storage section that the goats can't access; and the pen, where we put Jilly when she was a baby, so she didn't jump all over us while we milked Gerty. 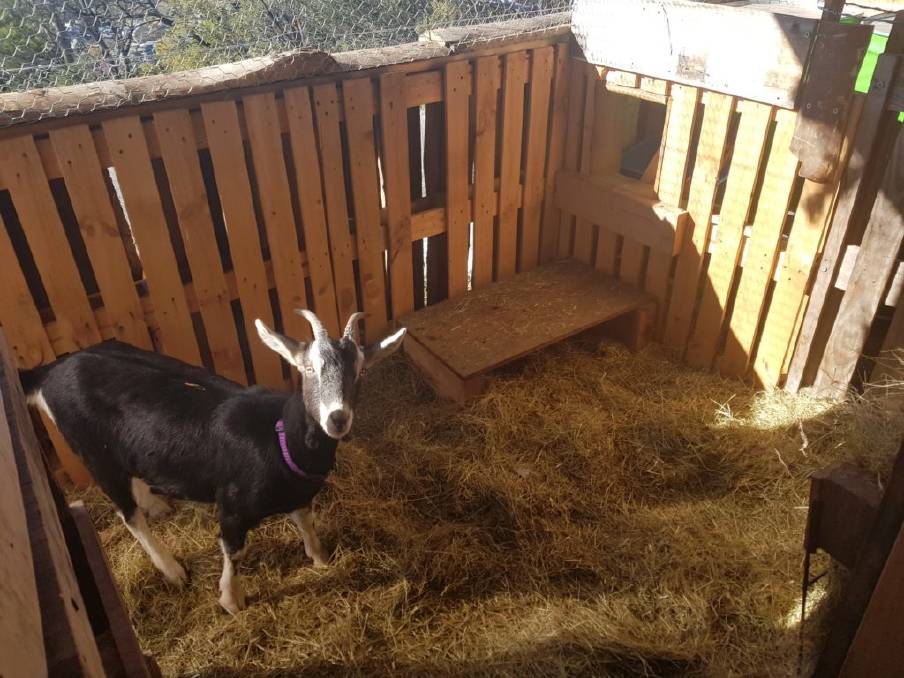 Jilly inside the goat shed.

We only milk once a day - in the morning. We get around two litres each morning, less over the winter months. With it we make yoghurt, feta cheese, halloumi cheese and ricotta. Unlike the goat milk you buy from the shop, fresh goat milk doesn't taste "goaty". It's quite sweet. The goaty taste comes after around five days, it's not a bad thing - just not a personal preference.

When it came to weaning Jilly, we didn't have to do anything, lucky for us Gerty (her mum) made this happen on her own. But a common way of weaning kids is to put them in a separate area to their mum, where they can still kiss noses, but can't suckle. The goat shed within the context of the urban garden space. Picture: Hannah Moloney

Our two goats came off an organic goat farm where they were treated with herbs, minerals and good pasture and food. When they arrived, Jilly was just two days old and in perfect health, while Gerty was a bit run down from being pregnant and living through a rough winter on pasture. She had a small section of staff on her udder which was spreading, was a bit under weight and had signs of worms.

We treated the staff with zinc cream and lavender oil, which our good friend and naturopath recommended. To my relief, the treatment started working within hours.

For improving weight, there's actually a product called "weight gain" for livestock, which is a rich mix of high protein grains you add into your chaff mix. In small amounts (no more than 600 grams a day per goat) oats and barley are highly effective options as well. Rolled barley is a cost effective alternative to organic oats. 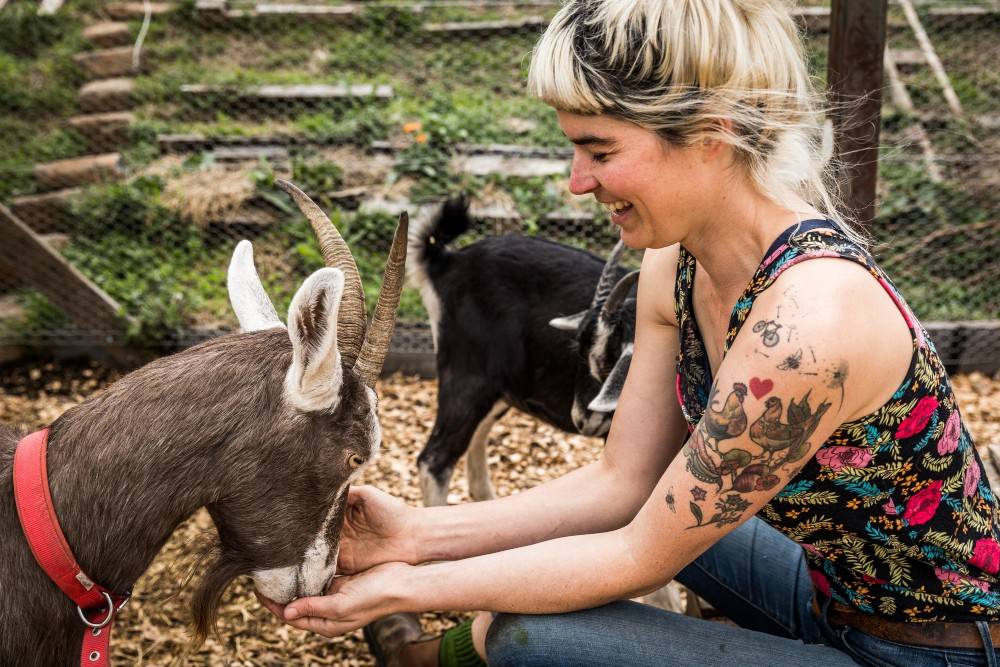 I got a vet out to check Gerty as her poo was forming big clumps instead of small pellets and her eyelids were a pale pink instead of a vibrant pink colour. Both are potential symptoms of worms.

The vet tested her poo which showed she had small levels of barber pole worm - blood sucking parasites that cause anemia and even death. I chose to drench Gerty this one time (at least) as I wanted to get her back to top health quickly. It worked really well and I'm relieved we went down that track.

These days I'm on a preventative treatment program with worms. Every month I add organic oregano oil mixed with some water into their feed for one week on and one week off - I repeat this for two cycles. So far this appears to be working well.

Every six to eight weeks we clip their hooves, it's an awkward job and our least favourite thing to do.

I love goats they're not just milk suppliers for us, they're wonderful, caring, smart animals to hang out with - better company than a lot of humans.

This story Urban goat keeping: the things to know first appeared on The Canberra Times.