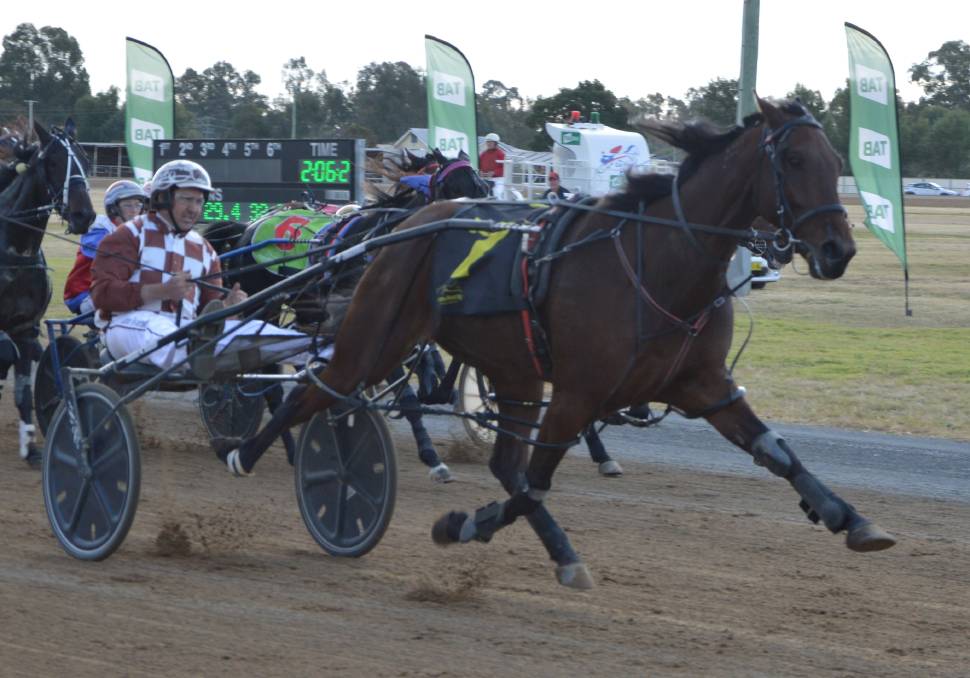 TOUGH HORSE: The ultra-consistent Parkes runner Good Cop was able to cause yet another upset, winning the TAB Pace. Photo: Kristy Williams.

It's fair to say there were a lot of happy people involved with the Forbes Diggers Harness Racing Club (FDHRC) at Sunday afternoon's meeting - but they aren't satisfied yet.

"If you think you've seen something good this year, just you wait until next year!" bellowed Craig Dumesny after the running of the Forbes Diggers Final.

It was an exciting meeting for punters too, with the favourite saluting in just two of eight races.

In unprecedented scenes, not only did star driver Amanda Turnbull not jag a winner - her runners went down at $1.06, $1.30, $1.28, $2.20 and $2.15, providing those trackside and playing at home with plenty of value and sending exotic prices skyrocketing.

Harness Racing NSW was on-course to see the success unfold in front of them too, with chief operating officer Peter Carney and Paul Cochrane, media and marketing manager, thrilled with what they saw at the sunshine-bathed track.

"I don't take much convincing to come down here to Forbes, so it's great to be back," said Carney, as he shook many, many hands with warmth and a humbling sincerity.

Carney was impressed at what the club has been able to achieve over the past two weeks, in what has been a great result for harness racing in NSW.

"It's fantastic the way the club comes together to put on some really special meetings, so a big congrats to Lex (Crosby), Emma (Gaffney) and the rest of the committee.

"The crowds have been absolutely fantastic and everyone is really enjoying themselves," he said.

It was an action-packed meeting, and here's how it went down. It was a special win for the Coffee sisters in the WIN Network Maiden.

The meeting could not have gotten off to a better start with a win for Sharon and Amanda Coffee, who bred and own Oh One Job, who is trained out at Bathurst by Mat Rue.

The sisters are prominent identities on the local scene, particularly through their photography, and FDHRC president Lex Crosby summed up the feeling on course.

"I'm tipping there's not a dry eye in the house after this win, and hopefully this is just the start of Amanda and Sharon breeding many winners," said Lex.

Rue, talking post-race, was also thrilled for the sisters.

"I'm really happy with the win for the Coffee girls. We've been through so much with this horse, but we've come through the other side and today was a great race to win, especially in the manner we did (28m win)," he said.

"It's always particularly satisfying breeding the winner...and nothing comes for free, so big congrats to the girls." Palmer-giana day kicked off with the race named in appreciation of Parkes stalwart Bill Palmer, and the Wendy Turnbull-trained Cala Greca cruised to victory.

Dumesny spoke after the race about the effect Palmer has had on the industry.

"It's nice to have people say something nice about you when you can hear it, and Bill is a gentleman and a bloody good bloke- he's done everything under the sun for both the Parkes and Forbes clubs and racing all around the Western region," he said.

Palmer, typically succinct and humble, was grateful for the acknowledgement of his time in the industry.

"I think I called my first race here in 1972 and my last race was 2018, so it is really special to have this named after me and I can't thank the Forbes Diggers Harness Racing Club enough," Palmer said. 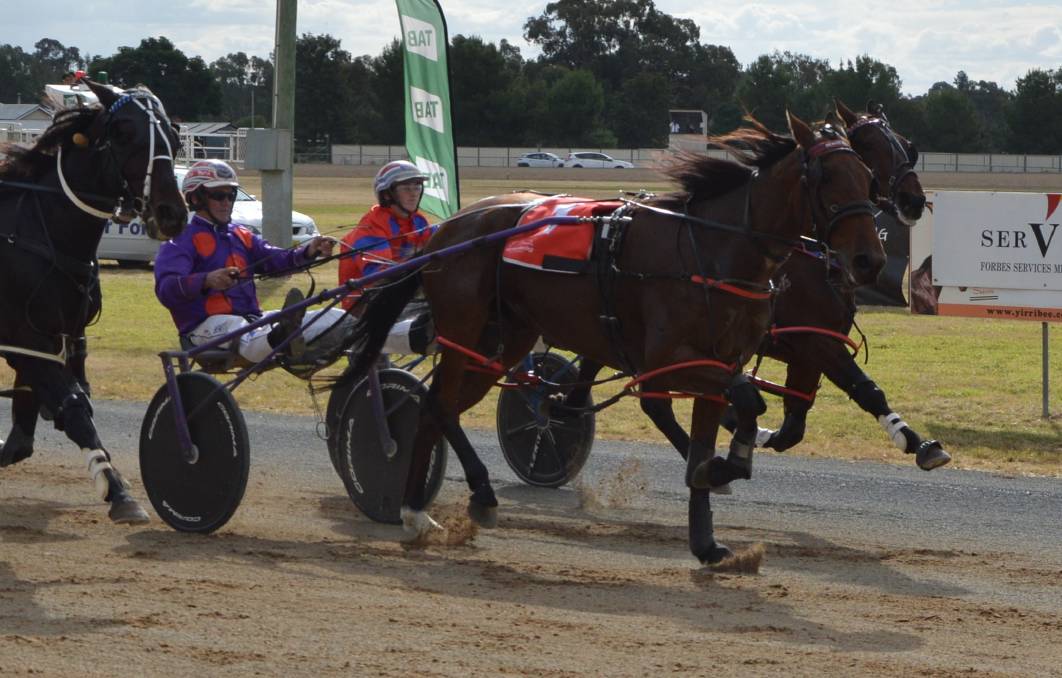 Theagenes overtakes the favourite, Smooth Bon Bon, right in the nick of time in the David Mason Appreciation Pace.

Bernie Hewitt's Art Major gelding, Theagenes ($12), won the David Mason Appreciation Pace in a boilover, with the well backed Amanda Turnbull-driven favourite Smooth Bon Bon ($1.50) fading in the shadows of the post as Theagenes rolled over the top in the 1.50m length win.

Securing the crucial draw of first on the front row proved to be the difference for Hewitt's gelding, despite showing some lacklustre gate speed.

Sitting two-out, one back, Hewitt bided his time before pulling out with 300 metres to go; winning in a swift 1:58.8 over Smooth Bon Bon, with Jacobs Thunder ($13) finishing like a freight train in third.

The gelding does not win out of turn, but Hewitt was happy with way he stuck at the task.

"He lacks a bit of speed but he's strong and back in grade he felt much better...it was the perfect draw and the owners will be absolutely stoked with this," said Hewitt.

TAB Long May We Play Pace

Parkes father-son duo Stan and Nathan Townsend are rarely without a winner for too long, and the ultra-consistent Good Cop ($5) was able to win in the customary brown check silks by 5.70 metres over Mendoza Lass ($9).

The five-year-old gelding has been very kind to each-way punters over the past 12 months, and he had a perfect lead into the race by Mendoza Lass, trailing one back before pulling off an extraordinary finish from four-wide down the straight.

Yet another out of Art Major, Good Cop was not at his best last start in the Les Findley Memorial, but he is a tough horse and just can never be discounted - no matter the form.

ALL SMILES: Bernie Hewitt returns to the judge pretty happy with his win aboard Iamajoyride in the Jack Honan Championship Final. Photo: Kristy Williams.

Yep, it was the Hewitt show again for the country features - and this time Bernie was in the gig of his filly, Iamajoyride, who held on by a short half-head for an absolute nail-biter of a win in the Jack Honan - securing a training/driving treble.

"It's been terrific day for the stable and this is just the cherry on top," Hewitt said.

"We threw her in the deep end a bit in strong company at Menangle and while she hasn't been at her best recently she was able to tough it out for the win.

"She's certainly a star of the future and this will harden her up a bit; racing in the city has set her up well for coming home and this was a perfect way to cap it off," said Hewitt.

The veteran reinsman also spoke about what it meant to win the Jack Honan Championship Final.

"To win the Jack Honan is always an honour, I grew up in awe of Jack and it has always stuck in my mind how much he went out the box when it came to harness racing and he was huge for the industry here in Australia - not just in the West," he said. Blake Micallef was in the gig of Mach Daddy for Steve Turnbull, with the three-year-old gelding upsetting stablemate Saint Julien ($1.06), who was stood down following the race for a vet's examination and electrocardiograph.

"We had to do it the hard way, but once I got to the front (after Saint Julien galloped) I felt really confident," said Micallef.

The young Riverina driver is making a name for himself all around the state, and you get the feeling it's just the start of a very long career.

"Steve (Turnbull) is always helping me out and I'm very grateful for the support he gives me, so it's fantastic to win the Final here for him.

"I'm putting the miles in, as any young driver has to, and I'm absolutely loving it - all for love - not for money!"