Calf rearing has always been a priority for Anthony and Wendy Eccles who own Purnim Holsteins, a dairy operation milking up to 460 cows at Purnim near Warrnambool.

The Eccles believe it's important for heifers to enter the dairy in peak condition to optimise production.

Their maiden heifers produce 8,000-10,000 litres as two-year-old's, thanks to a combination of genetics and feed, according to Anthony.

He'd used additives before, but after recommendations from leading local farmers, he swapped to the live microbial feed supplement Mylo.

A "scoop" of Mylo has been mixed into each bucket of milk fed to the calves for the past year. Anthony, with Axel, in his rotary dairy on his Purnim Holstein farm. He milks up to 460 cows, twice a day.

"Compared to our other additive, the calves have more energy to drink, to run around and are shiner. They got that extra start to life," he said.

Research by the University of Queensland's School of Veterinary Science demonstrated calves fed Mylo were heavier at weaning and had more pronounced gastrointestinal development.

But Anthony doesn't believe attention to detail ends at weaning, which he does at about 10 weeks old (140-150kg).

"You still have to be feeding grain and making sure they have good grass - or silage in the summer - because they can still go backwards," he said.

For the past six months a 5ml of Mylo has also been applied to the milking herd's bail feed. It's squirted on top of the high energy mix of maize, wheat and minerals. The cows are fed to production and in late January, the herd's big producers received 8kg/day/cow.

This year's average production has been 9000 litres/cow with 4.2 per cent protein and 3.6 per cent butterfat. The Eccles' herd calves twice a year and a large portion of their supply's contracted to Woolworths for fresh milk.

Maintaining a low somatic cell count is crucial to this contract. Anthony's herd cell count sits between 70,000-90,000cells/ml and since using Mylo it hasn't moved.

"It's given me more peace of mind. I'm not doing as much milking and we have other milkers, but they are not stripping cows all the time to find who has got the mastitis and why (the SCC) has gone up. We don't strip cows," Anthony said.

"I find we don't have to worry about that because it is steady the whole time and we might only have one cow - if she does get mastitis - it is quite easy to find."

Since using Mylo, Anthony's herd hasn't had any new cases of mastitis. This development has reduced drug costs but more importantly, less sick cows has meant more milk in the vat each day. The Holstein herd grazing enthusiastically after morning milking and a 5ml dose of Mylo in the herds bail feed.

University of Queensland research on mid-lactation dairy cows, across 24 weeks, demonstrated cows fed Mylo had a 38 per cent lower SCC.

Former University of Queensland researcher and current Veterinary and Animal Sciences Head at Terragen Biotech - the creators of Mylo - Dr John Alawneh said the probiotic interactions with the cow's gut microbes and the digestive process in the gut could explain the observed herd health and productivity benefits.

"When the cows are healthier and are offered sufficient feed to cover its production and physiological needs, cows will try and partition more energy to the udder, enhancing milk volume and quality," he said.

"The process will also improve the local defence mechanisms of the udder. This means they are better and more efficient at fighting pathogens, as the teat canal is capable of producing a better quality seal around the external orifice, which prevents microbes in general coming into the udder, causing disturbances which results in an increase in SCC."

For herds like the Eccles, John said the addition of Mylo could have helped "optimise" and possibly "stabilise" their mastitis program.

He said traditionally farms with a SCC of less than 100,000cells/ml would see fluctuations in their cell count as infected cows with counts of 500,000cells/ml or more enter the herd. 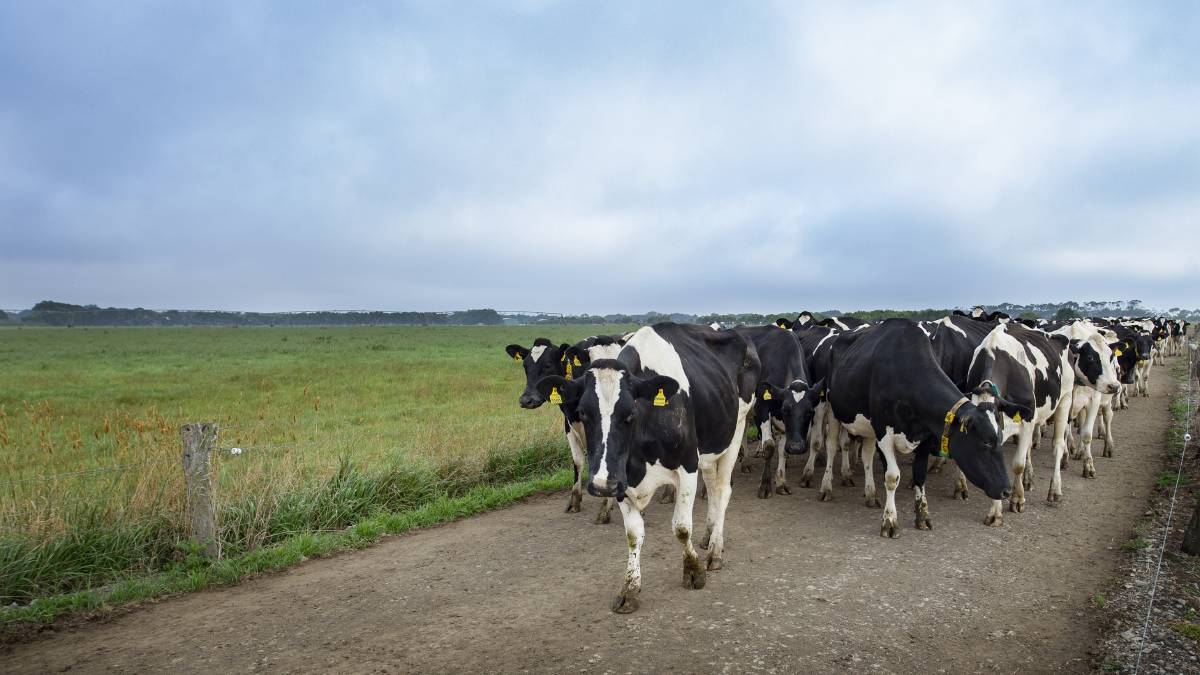 No new cases of mastitis in the dairy herd since starting Mylo six months ago, Anthony says.

"Those cows would benefit from a product like Mylo because it is providing them with better energy reserves...to which the udder fights infection."

For a low SCC herd, feeding Mylo is expected to "smooth" its SCC curve, removing fluctuations.

"The science and evidence are positive and encouraging, however, more research is underway to explore further the benefits dairy farmers are seeing from Mylo," John said.

The effect of Mylo on fertility has yet to be investigated, but Anthony has noticed differences in the behaviour of his cows.

"The cow's heat is a lot stronger," he said.

"I see cows, when they are jumping and mounting, will really tear the skin where they have been jumping because they are having so much stronger heats than what they were."

This makes it easier to identify cycling cows for artificial insemination.

"With these you can definitely tell she's on heat and you can tell a lot more groups of cows are on heat too," Anthony said.

"Some cows might only have been calved 30 days and they are having these really strong heats because the Mylo has kicked it into gear a lot quicker."