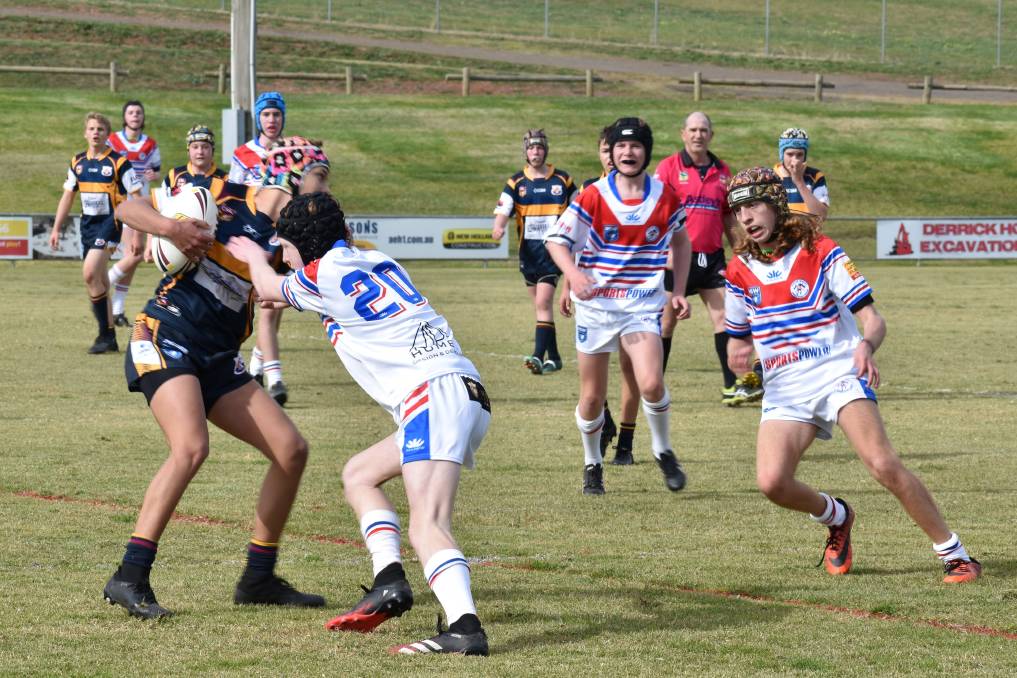 The McPhersons sponsored Under 7's played the South Dubbo Raiders in Dubbo last weekend in a very even contest. Nine tries each from both sides ensured a very entertaining game.

Big Beau Thompson scored 5 tries, with Jackson Ross, Saxon Gosper and Lebron Murray all crossing for their first try of the season.

Some improved passing from Bill O'Bryan and some good tackling from Oscar Gosper in very wet conditions put a smile on the coaches' face.

The whole team should be very happy with their efforts this week against a much bigger team. Some of the tries scored were straight through the middle, but Lebron's runaway effort was definitely the highlight. Again some more tackling practice at training will help.

Saxon Gosper was our man of the match, just in front of Beau and Jackson. Well done boys!

We are at Dubbo again this Saturday at 12.00pm.

The French Taste Bakery Parkes Under 8's also travelled to Dubbo for a clash against the Raiders last weekend.

Great teamwork in the attack saw Bradley Lewis barge over the line for the first of his two tries while Jaxon Clarke and Toby O'Keefe were "tough as nails" in defence.

Ned Hewes served the team well from dummy-half while both Nate Goulthorp and Aisea Folau supported well in attack and defended brilliantly.

A reminder from coach Benjamin Lovett how important it is for all players to attend training to keep improving their skills and growing as a team.

K & H Construction Under 12 Whites had a loss in Dubbo against Dunedoo.

Central West Fluid Power under 12 Blues travelled to Dubbo to take on the Cobar Roosters in Dubbo. The conditions were extremely trying but we went out and showed the Roosters what the CWFP Blues are made of.

Our ball handling and defence were superb from the outset with points hard to come by.

The first try came from Oakley Fleidner with the try successfully converted by the skilled Linc James.

After implementing some training skills to work, constant pressure from the defensive line saw the ball come back into our possession.

This was the opportunity we needed and the points came after a slick run out wide saw Oakley Fleidner cross the line again with the conversion successful from George Thomas.

Superb defence from Kailen Butt, Harry Turner, Lachlan Thomas and Caleb Gould showed no sign of letting them through but match fitness is still an issue and in the final minutes before half time the Roosters snuck in taking the score to 12-4.

The team set to work early in the second half and points came again via a fast stepping Jaylin Moran. This time there were no points to add with a missed conversion taking the score to 16-4.

CWFP's smallest man Riley Fernando showed no fear and he led by example out wide with some fantastic runs and ball clean ups at every opportunity.

Cobar had plenty of reserves and were keen to get them on the field with fresh legs, showing our lack of fitness once again but Ryan Whitney and Ryan Cox continually took on the defence and set the pace with determined runs at every opportunity.

Consistent backing up from Camden Graham, Hamish McGrath, Jaylen Kelly, Callum Munday pushed Cobar the whole game but another set of fresh legs from Cobar saw them get themselves a try with a conversion taking the final score to 16-10.

This week the team has a bye so the coach says they will be working on fitness, fitness and more fitness at training.

The Parkes Sportspower/MP Homes and Design Under 14s took on Red Bend at Spooner Oval looking like they would win convincing after 10 minutes.

Unfortunately, due to the extremely wet weather, the game turned into a very competitive and hard fought 50 minutes.

Defensive pressure led to a knock on from Red Bend and a good set by the forwards saw a quick play of the ball that led to Oliver Thomas storming over to the right of the posts. Dean Robinson converted the try.

Another knock on from Red Bend at the scrum, put us in great field position. We then received a penalty for offside and Jack Milne then kicked to the right and Kane Coulston, under difficult conditions, gathered the ball and scored in the corner.

Red Bend then retaliated with a try, which took the score to 10-6. Caleb Crisp, Bob McEwen, Toby Cox and Joe Monk were brilliant in defence, while Jack Jessop's defence on the line was outstanding.

After a repeat set, Red Bend then scored next to the post and converted to take the score to 10-12, Red Bend's way.

Caleb Crisp showed speed and evasion with his runs from dummy half while Reece James and Joe Monk made some brilliant runs to get us back into our attacking half of the field.

In the second half, Zac Payseno and Daniel Hando were outstanding in defence, particularly against Red Bend's front row.

With only 12 on the field, Reece James made a break down the left hand side and after a quick play the ball, Marley Moran ran down the sideline to score in the corner taking the score to 14-12, Parkes way.

Aiden Byrnes and Reece James continued to keep making metres to get us into good field position before Oliver Thomas then scored from dummy half, taking the score to 18-12.

Disappointingly for the boys, just before full time Red Bend scored and converted to take leave us with an 18-all draw.

The MP Home Design and Develop Under 10 Mod League tag girls played in treacherous, raining conditions against the South Dubbo Radiettes. Many of the girls were freezing and a bit hesitant to get started. Once the whistles blew, they all forgot about the rain and were straight into the game.

The girls walked off the field absolutely drenched and covered in mud but very excited for their second win. The final score was 36 to 20. Another great game for the girls!

Try scorers were, Charli Milne and Corby Fliedner with 3, Emma Hando with 2 and one from Aleeya Ehsman. Some great runs from Ayesha Carruthers and Miley Duff and some excellent defence by Maddison Doering.

The Bob Skinner sponsored Under 13's Junior League Tag went down 20 -18 to Nyngan.

We came out a bit slow and had points put on us early but improved a lot as the game went on and were easily the better team in the second half but luck just didn't go our way.