The McPhersons Under 7's played their first game of the season against Dubbo St Johns Gold on Saturday. For all but one player, it was the first time they had ever played a game of rugby league.

After a couple of early tries to Dubbo, the boys began to get a better understanding of the game. Our only experienced player, Jackson Ross, made some very good runs to inspire his teammates but it was a pumped-up Beau Thompson who crashed through four Dubbo defenders to score a great try.

This was followed up by some good tackles by Oscar and Saxon Gosper. A good run by Bill O'Bryan saw him tackled just short of the line. Another Dubbo try didn't dishearten the boys, and a couple of big runs by Lebron Murray and Saxon Gosper, had all the boys keen to run the ball.

Parkes scored again through one of the Dubbo boys who helped us out. A big thank you to St John's Dubbo for loaning us a different player each quarter to ensure both teams were even.

This was a great first effort and a special mention to Saxon for his outstanding attitude. Some more training and games will see more improvement, but a bit more tackling practice this week will be needed.

Tackle of the day went to Lebron, who poleaxed Bill. Hopefully next week he can do the same to the opposition. Man of the match was very close, with Beau having a great game.

If any more kids are keen to play, training is at 4.30 Thursdays at Cheney Park, opposite the netball courts, for approximately 45 minutes.

The proudly sponsored Central West Fluid Power (CWFP) Parkes Marist under 12 Blues travel to Narromine on Saturday to play the Jets, and from the first set it was clear that Narromine wanted to start their season with a win and soon had points on the board.

A hard running set and a dummy half scoot saw our defensive line open up and the Jets were in beside the post and the extra 2 points were added 6-0. However with our determined former Jets player, Hamish McGrath, he wasn't going to let them get the upper hand.

The Parkes team reset and slowly started to grind away for the first time and complete a few sets themselves. Soon it paid off with Oakley Fleidner weaving his way to the try line and with a successful conversion from Jaylin Moran the score was 6-6.

A strong run and a step then had Lachlan Thomas go under the sticks and the conversion was successful from Caleb Gould, taking the score to 12-6.

Not to be outdone, Narromine hit back soon after and quickly bought the score back to 10-12 with 5 minutes left in the first half. Some strong defence by Harry Turner, Caleb Gould, Jaylin Moran, Ryan Whitney didn't see the Jets score any more points before half time.

The CWFP team was determined to take control of the second half and did just that, with strong tackling from Kallum Munday, Riley Fernando, Jaylen Kelly, Kailen Butt and Camden Graham set a great foundation for Lachlan Thomas to pick up his second try which was successfully converted by George Thomas.

It was 18-10, Parkes was starting to gain control of the game now, with some solid passing from Linc James at dummy half creating a good foundation for set plays and with a strong outside run Caleb Gould burst over the line to pick up an extra 4 points, 22-10.

Narromine soon regained their composure and started putting the pressure back on, with a try coming just before the final quarter bringing it back to 16-22.

A lack of fitness was starting to show in the final quarter but a quick step from Oakley Fleidner found points once again with his second try and we added another 4 to the tally: 26-16.

Confidence in ball handling and completion of sets was improving and saw a quick play of the ball midfield by Ryan Cox set a great foundation for the ball to move wide and a great backup wingers try was scored by George Thomas in the final minutes taking the score to 30-16.

With a bit of of luck more fitness and confidence, the kids can finish the season how they started it. 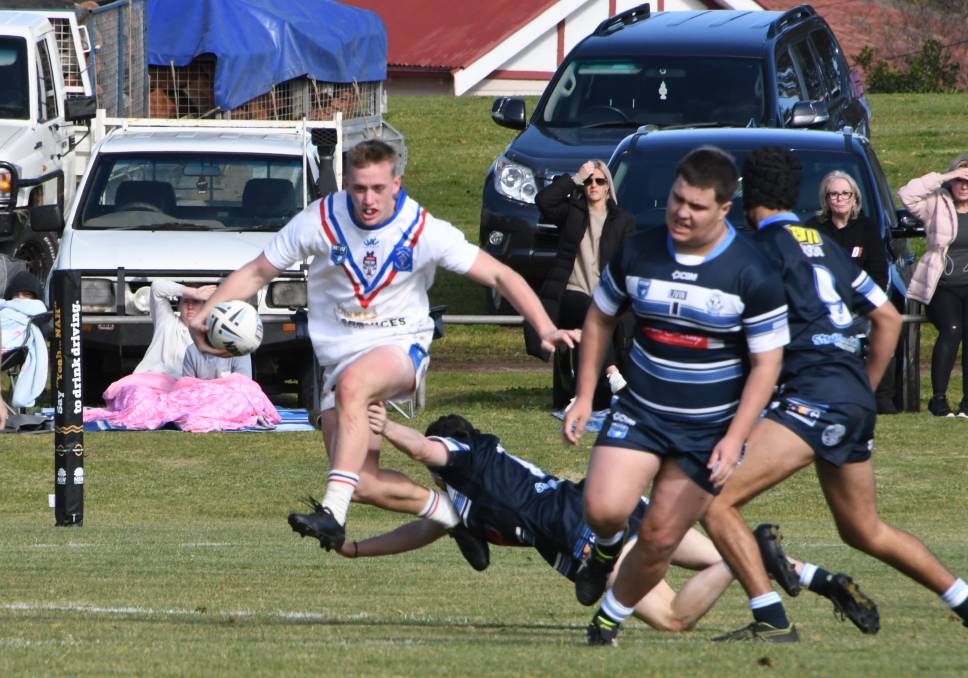 Sportspower/MP Homes and Design Under 14's took a bit to settle in their first game on Saturday allowing St John's Dubbo to open the score board with two tries and a conversion. A penalty kick didn't find touch and Parkes defence had to remain strong to keep St John's from scoring again before half-time.

Second half saw the boys determined to put points on the board but unfortunately St John's scored again. Reece James had the spectators on their feet when he made a fantastic break only to be tackled short of the line.

Parkes fought hard and came close several times to scoring but it was the quick move from Caleb Crisp that saw him over from dummy-half. Conversion by Dean Robinson saw Parkes on the score board 6 - 14.

Parkes continued to drive the ball towards the line with Joe Monk forcing his way over the line to score. Paul Richter converted and although Dubbo held the lead it was 12 -14 and Parkes had narrowed the score.

With three minutes to go St John's found a gap and scored successfully converting and taking their win to St John's 20 - Parkes 12.

Brian Collins Smash Repairs & Agriwest Under 16's had an exciting win against Red Bend at Jock Colley Oval, Parkes on Saturday. The boys were pumped being the first game back for the season and their enthusiasm showed on the field.

Bayden Moran went across for our first try then successfully converting that try. Play was suspended when Jai Thompson was tackled awkwardly which resulted in a knee injury.

Tye Toomey scored the second try in the corner, unfortunately conversion was unsuccessful. Jamie Thorpe then went over to score the last try of the game with conversion being successful.

The girls had their first game against St Johns in Dubbo. All girls played so well and came away with the win for their first game. They all got one try each, with Ayesha and Corby getting two and Emma getting three. Great way to start the season. Well done girls.

Bob Skinner Painting Under 13 Junior League Tag team played against Narromine on Saturday. The team had a lot of new players joining them this season. Nell Smith scored the first try with a successful conversion. She went on to score another try for the team. Grace McGregor scored 3 tries and our newcomer, Alana Folou, scoring 2 tries in her very first game!

Grace Milne put more points on the board with 2 tries followed by Jorja Hanson and Bill Mahon providing some beautiful conversions. Jemima Grosvenor had a break up the sideline but was tagged short of the line.

Lots of great plays by the whole team on Saturday took the final score to Parkes 50 - Narromine 6. A great result for a newly formed team.