From swarms of festival goers and Elvii here for a good time to incredible fundraising initiatives for those affected by the devasting bush fires, to dust storms and a medical incident - could the 2020 Parkes Elvis Festival be one of the most emotive festivals yet?

With the bush fires and drought expected to have an impact on festival numbers, about 25,000 fans from around Australia and the world had still been roughly counted attending this year's five-day event that's now in its 28th year.

The Elvis Festival began on January 8, concluding on Sunday, and while director Cathy Treasure said the official figures were still coming in, she added the numbers were "up and down" this year.

"While many of our festival supporters were affected in some way by the devastating bush fires, we are thankful for those that could still come and enjoy the festival with us," she said.

"Our ticket sales were up and reports from businesses were really positive.

"It was quieter at the start of the festival but I noticed after the street parade how big the crowd was so I think on the weekend we caught up.

"We also had more ticketed events this year so the people were spread out more."

For those who were here, many took the opportunity to raise money for bush fire appeals, including festival organisers.

The Parkes Elvis Festival is supporting the Red Cross' relief and recovery efforts and has so far raised $3303 of its $10,000 goal.

Cathy said almost every entertainer at the festival was doing their part too, as were local businesses and groups like The Railway Hotel and the Parkes Boars Rugby Union Club, and individuals such as Parkes' own little Elvis groover Sebastian Bodiam.

"Greg Page raised a great deal of funds... We encouraged people to be part of it where they could," Cathy said.

"I have family who have been directly affected so I know it's a tough time.

"We are proud to have received a considerable amount of donations for the Rural Fire Service, WIRES and the Red Cross.

"We will keep our online appeal open for those who would like to contribute the Red Cross relief and recovery efforts during these challenging times."

Along with the professional highlights of the festival being the presence of US Elvis Tribute Artist Dean Z and Australian music great Joe Camilleri, the street parade was a particular highlight for Cathy.

On Saturday morning the main street rang with applause from all those who gathered to watch the parade as Parkes' rural firefighters led the procession.

"It was touching to have the firefighters at the start and to see how the crowd responded to that," Cathy said.

"I thought that was really special.

"They were some of the highlights, there were so many."

Cathy said they were among the most impressiveElvis-themed entries in the festival's history.

"The quality of the parade was better this year and there were more floats which was great," she said.

Another standout was the number of first-timers to this year's festival, which Cathy said could be attributed to their media reach and marketing campaigns targeting new groups.

"We are targeting new groups, such the rockabilly market," she said.

"And our media reach was so big last year that I think people are realising the festival isn't just for the hardcore Elvis fans but for those who appreciate Elvis and the era too.

"It's opened the festival up to a whole new audience.

"So there are a number of different factors."

The Elvis Festival wasn't complete without a very nasty dust storm that blanketed the town on Friday night, just as day three's festivities were coming to a close in Cooke Park.

It was so bad and came in thick and fast that people could barely see a few metres in front of them and turned many swimming pools brown.

And if Parkes Shire Council staff weren't busy enough, they had that to contend with too.

"I don't really think people realise how much they (council staff) do," Cathy said.

"That park on Friday night, all of those chairs were covered in mud, it was horrendous.

"They had the parade to set up for the next morning and having those chairs clean the next day, it's a testament to how hard they work.

"We've had a lot of comments about how clean the town is during the festival."

The festival is done for another year - it saw the Elvis Express and Blue Suede Express take a different route through Cootamundra and Forbes because of fire damage to the rail tracks in the Blue Mountains, making it a nine hour trip instead of six.

For the fifth year running, a preliminary round of the international 2020 Ultimate Elvis Tribute Artist Contest was staged at Parkes Leagues Club, with Toki Toyokazu of Sendai, Japan taking the this year's title. 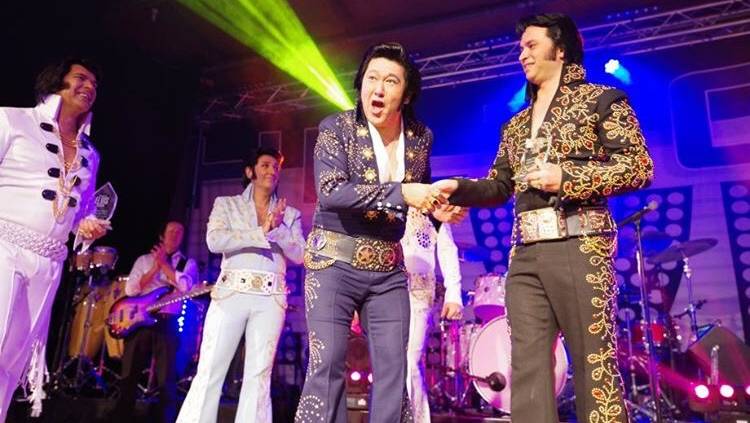 AND THE WINNER IS: Toki Toyokazu of Sendai, Japan won the Australian preliminary round of the international 2020 Ultimate Elvis Tribute Artist Contest at the Parkes Elvis Festival on Saturday. Photo: Michael Samson

READ MORE: Elvis on stage, in pain and clutching his chest - this was no performance

Che Orton of Hamilton, New Zealand placed second in the competition and Brendon Chase of the Gold Coast, Queensland, third.

Toyokazu will now travel to Memphis, USA, to represent Parkes at the semi-final during Elvis Week in August.

The 2020 Priscilla, Face of the Festival, was awarded to Shania Sarsfield of Wellington, accepting the sash from outgoing 2019 Miss Priscilla, Erin O'Leary from Peak Hill at a gala dinner on the Thursday night of the festival.

"I'd like to thank our incredible sponsors, performers, volunteers and staff who have been instrumental to the continued success of the Festival," Cathy said.

In 2021 the Parkes Elvis Festival will celebrate its 29th year with the theme "Speedway".

READ MORE: Trip to Elvis Festival leads to a wedding and special tribute to groom's dad