The Country Women's Association is often associated with baking, particularly tea and scones. What you might not know is the CWA is actually a formidable group of women Australia-wide who are advocating and lobbying politicians and parliaments for change every day, and the groups in the Central West are no different.

The CWA ladies are proud to be known for their excellent baking skills and the ability to host one of the most scrumptious morning teas you will probably ever consume.

They are also proud of the fact that they campaigned to get warning labels on energy drinks, that they were a part of lobbying for the safe access zones in reproduction clinics and that they continue to advocate for health and education in rural and remote areas of Australia.

Danica Leys is the NSW Chief Executive Officer of the CWA. She said a lot of people don't understand all of what they actually do. 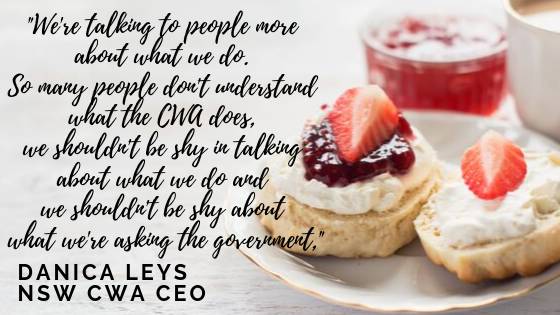 "A lot of our policy is agricultural based and a lot is around social issues. A lot of our policies are about access to adequate health and education services in rural and remote areas. They are our main drivers, equity of access deals that people want to have a voice in.

These policies and ideas are formed from people on the ground, members who are at the grassroots level.

The Macquarie Group and Bathurst Evening Branch are both big supporters of making quad bike roll bars compulsory, a policy the CWA is advocating state politicians for.

Read also: On World Animal Day, think about how you can help

"We're lobbying the government on many, many things. The government does listen to us and the state president has wonderful access to politicians, they do appreciate our views" Macquarie Group president Karen McHale said.

Every CWA branch also has the capacity to pick projects the members are passionate about supporting.

In Orange the members collect clothing for a third world country.

"We collect clothing for mothers and babies in Papua New Guinea and other practical things our members enjoy," Branch secretary Deborah Marr said.

"We make domestic violence victim packs and then help women to get skills for the workplace," president Sheena Rigby said.

"Sometimes it's the small things that are more powerful than making lots of money."

Sometimes it's the small things that are more powerful than making lots of money.

While the fundraising, advocacy, lobbying and policy making is very impressive, there's another wholesome element to the CWA. The group provides harmony for like-minded women.

"I've only been in the Orange CWA since 2012, but we are very fond of each other and we're a very disparate group," Mrs Marr said.

"[This group] teaches you to be respectful of individuals and the gifts they bring."

In Bathurst, Ms Rigby said their group of women was very welcoming. Their evening branch is full of mostly full-time working women.

"We feel we're making a difference. We're not so much a lobbying branch as a how can we help branch," she said.

"When I call for help to do things, I just email and they come help, they're just there," she said.

Working hard to help our farmers

The Country Women's Association has raised more than $13 million for drought-affected communities across NSW - and that's just through the head office.

At a local level, branch members are also doing whatever they can to help their drought-affected neighbours.

"People come from all over the area, some travel up to 150 kilometres for the deliveries."

Bathurst evening branch president Sheena Rigby said they were also helping out in a practical way.

Read also: Are zombies draining life from your phone?

"Whatever we fundraise goes to drought relief," Mrs Rigby said.

"One way we assist is we actually send money to a branch in the Far Western Group to pay membership. It keeps CWA members connected to the community.

"There's not a lot of them out there but it helps get them to the AGM, which is a long way." 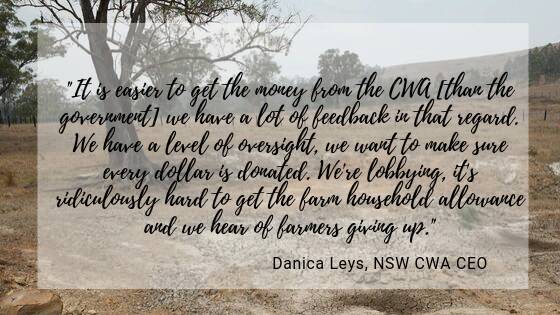 NSW CWA CEO Danica Leys said the organisation had given out close to $13.7 million in household assistance since July 2018.

The CWA offers a $3000 one-off payment to eligible households to help with bills and other expenses.

"The demand is still there. We haven't been able to offer a second round even though the bills are still rolling in.

"We're still getting first-time applicants and we only have a finite amount of money."

This allowance is similar to the government's household allowance scheme for drought-affected families - but with less red tape.

Read also: How to make your spring cleaning safe for your pets

"It is easier to get the money from the CWA, we have a lot of feedback in that regard," Ms Leys said.

"We have a level of oversight, we want to make sure every dollar is donated.

"We're lobbying [the government], it's ridiculously hard to get the farm household allowance and we hear of farmers giving up.

"[Through] our name and more importantly our network of 400 branches across NSW we're administrating our drought grants. Although they are so much more than tea and scones, the CWA has been making the best scones for almost 100 years. Here's some of the recipes they've been using.

Makes 12-18 (depending in the size of your scone cutter)

Beat the egg, oil and milk until combined. Sift the flour, sugar and salt into a bowl. Add the egg mixture to the flour. Knead until just combined and then turn the dough out onto a floured surface. Pat into a flat shape of the thickness you'd like your scones. Cut with a floured scone cutter and then place on a greased tray. Cook at 220 degrees for 12 to 15 minutes.

If you're feeling adventurous

Preheat the oven to 180 C (fan-forced) or 200 C (conventional). Sift the flour into a large bowl. Add the cream and then the lemonade.Quickly (but gently!) combine the ingredients into a dough in order to trap as many bubbles as possible into the mixture. Turn the dough onto a floured surface and, once again gently, roll it out to a thickness of about 2cm. Cut your scones out with a cutter. Arrange evenly on a tray and bake for about 15 minutes, or until golden. Serve with jam and thickened cream.

Have something to say? Send a letter to the editor by filing out the form below.

This story More than tea and scones: What are the CWA doing during the drought? first appeared on Daily Liberal.