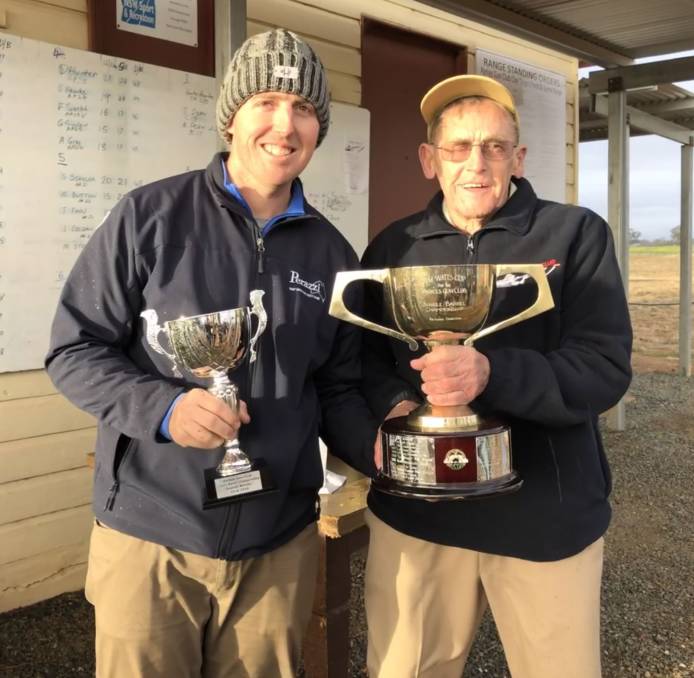 Local shooters, plus some of the best shooters from all over NSW, were in attendance, making up eight full squads contesting three prestigious annual championships and over $3000 in cash awards.

In spite of the bad weather the day was conducted in an excellent manner, both in the shooting and the large dining tent, serving three choices of hot meals and coffee provided by Adele Hawke, Sue Dean and Kay Dykes. In all the day turned out to be one of the best managed and enjoyable events seen at the club in recent years.

Cliff and Kay Dykes of Cowra deserve a great thank you for their untiring help, both in promoting the sport of clay target shooting and their involvement with catering.

Parkes Gun Club and fellow shooters would sincerely like to thank all the Parkes businesses who sponsored and supported the club on the day.

On the day the two surviving life members, Jim Watts and Eric Miles, were presented with jackets featuring the new club logo.

A number of Parkes shooters also attended the Central Zone Trap Carnival at Condobolin in July. Peter Barber shot 25/25 in the single barrel championship and was involved in a shoot-off for the overall prize, eventually coming first in B Grade.

Youngsters Hudson Hawke and Joe Ellison both performed well on the day and were selected in the Central Zone Junior Trap Team that will compete at the NSW State Carnival in Wagga in early October. Both boys are third generation shooters of the Parkes Gun Club.