Rovers Black had plenty of attacking opportunities throughout the match but solid defence from Tracie Sams and quality goal-keeping from Megan Hornery kept them scoreless.

Madeline Blackstock converted for PHI after great lead-up play by Casey Miles and Lyndal Matthews cracked a rocket in on a penalty corner.

Best for PHI were Casey Miles, Sarah Hartin, Kylie Blackstock and Lyndal Matthews with Lara Piercy and Abi Simpson both strong for Rovers.

Rovers scored late in the match through Louise Edwards to see the score finish at 4-2.

Best for Magpies were Meghan Searl, Peta Fagan and Louise Witherow with Casey Miles and Louise Edwards the best for Rovers.

Hugo Fenton was in scintillating form picking up maximum umpire points for Cellars. He was well supported by Dane Hendry and Paul Kirwan.

Marist were best served by Jeff Westcott and Matthew Hunter. Middleton were too strong for Rovers running away with a 7-3 victory in a high scoring match.

Best for Middleton were Nick Kelly, Will Blunt and Dave Sherritt with Ryan Burley, Simon Scott and Mat Swindle all playing well for Rovers.

Strong performances were had by Brody Clarke, Andrew Rice and Ryan Dunford for Academy with Cody Kirk and Isaac White the best for Black.

Natalie Munday has had great touches in the circle in recent weeks and was on hand to score for Magpies.

Tiffani Townsend converted for Magpies with Cherie Simpson on target for Middleton.

Skye Harris, Jen Hunt and Lisa Clarke were the best for Magpies with Gabrielle Noakes, Cherie Simpson and Louise O'Leary all strong for Middleton.

Youngsters Molly Brown and Maggie Wright scored nice goals for Academy to seal victory for their side.

Carla Peden was in her usual good form scoring a double with Chloe McCarthy, Sass Tildsley and Rachel Hoy also converting for Rovers.

Michelle Skinner and Toni Speakman both scored for Cellars.

Star Budgies snatched a 1-1 draw with Marist in the dying minutes of the match on the back of an excellent defensive performance. Marist had plenty of attack and were rewarded early on with a goal to Ava Hayes.

Budgies had to work overtime in defence but held strong and were able to make the most of a penalty corner opportunity at the end of the match which Carmen Amor converted.

Best for Budgies were Emily Townsend, Rachael Kelly and Melissa Coles with Lyndal Matthews, Renee Rice and Jordan Moody the best for Marist. 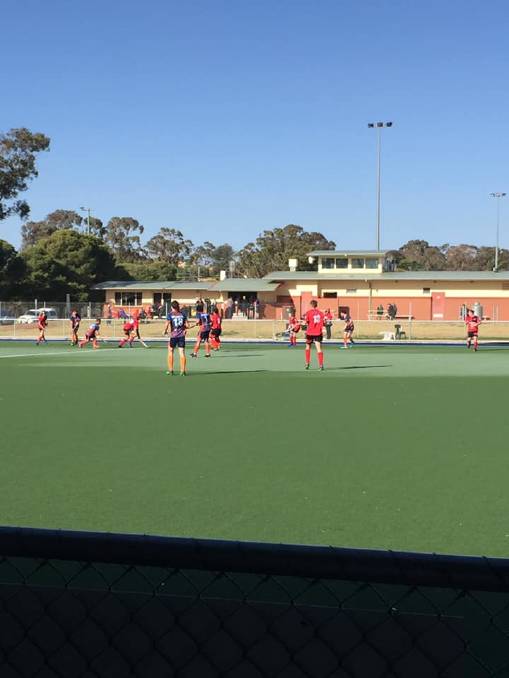 On Thursday, July 4 a Minor Singles match was played with Trevor Harvey up against Ian Simpson. Ian started well and led 5-0 after four ends but Trevor had taken the lead 7-6 at the start of the eleventh end. Scores remained fairly even but by the twenty-seventh end Trevor had a three shot advantage, 21-18 and went on to win the match 31-19 after thirty-four ends.

In the Minor Pairs, two matches were played.

On Saturday, July 6 George Boatswain and George Bradley came up against Gary McPhee and Greg Townsend. The two Georges tried hard but were no match for Gary and Greg. They played some good shots but when they did Gary or Greg played brilliant shots and went on to advance to the next round with a very comfortable win.

A good field of twenty-two bowlers (including one visitor, Peter Hevers from Trundle) turned out on quite a good day for bowls.

In a fairly close Pairs match, Warren Bevan and John Watson came from behind to level the score 12 all against Col Mudie and Jim Blake after twelve ends. They then won the next four ends to lead 18-12 but Col and Jim fought back and with two ends to play they had levelled the scores again at 18 all. Warren and John won both of the final ends to run out winners 24-18.

Mark Dwyer and Chris Dunn won the first three ends of their Pairs match against Col Hayward and Mal Porter to lead 6-0. It wasn't until the thirteenth end that Col and Mal gained the lead 14-13 and scored seven on the next three ends and eventually ran out winners 26-16.

Another good field of twenty-four players turned out in spite of quite a strong wind.

Rob Irving and John Watson played against Rhona Went and Mal Porter. Scores were fairly even in the early part of the match but Rob and John gradually built a lead and with three ends to play were five shots in front, 17-12. On the nineteenth end Rhona and Mal scored four shots but could not quite bridge the gap and Rob and John won the match 19-17.

In another close match Steve Turner and Gordon Dickson had the better of the early ends against Tom Furey and Eileen Bradley. It wasn't until the twelfth end that tom and Eileen took the lead for the first time, 15-11. However Steve and Gordon scored 9-2 on the next three ends to regain the lead 20-17 but from there on it was all Tom and Eileen and they claimed the match 23-20.

The Lucky Rink prize went to Rink 5 and Eileen Bradley drew the magic No. 7 to share the $160 prize with Tom Furey, Steve Turner and Gordon Dickson.

Badge Draw: The badge draw was not won last week and will be worth $2400 this week. As usual, it will be drawn on Friday night sometime after 8pm when the raffle is finished.

Hope to see you at the club for the chance to enjoy a great Pub style meal, win cash, a meat tray or voucher and (if you are a Member) have a chance to take home the Badge Draw jackpot.

We had 16 ladies take the field for our Wednesday Monthly Medal.

The winner with a great 69 net was Col Staples.

Thank you to our sponsor, Central West Glass.

Lorrain Maxwell won the putting with a great 29 putts.

We would like to welcome our new Lady Golfer Kay Inglis.

Saturday's results for our Monthly Medal once again sponsored by Central West Glass are as follows:

Monthly Medal winner was Anita Medcalf with a 71 net.

The trophy winner was Anne Bukley also with a 71 net.

Any ladies interested in having a game of golf or becoming a member, just call the team at the Pro Shop on 6862 2044.

Once again thank you to all our sponsors.

Parkes made a clean sweep of all the trophies when Roel Tan Cate took home the encouragement aware.

Despite this, Forbes were triumphant in the Mick Miller Shield, 151 to 150. Ken Herbert and Roy Bell were the only winners in the nearest the pin competition.

We come back to Parkes this week and then return to Forbes for the Lachlan Valley 18 Holes Competition. All Parkes are again reminded that their Annual General Meeting takes place after our game this Thursday.

Duck Creek Picnic Races. Gadfly established a weight carrying record for the race when beating a good field in the Win Television Duck Creek Picnic Cup at Nyngan on Saturday.Allocated 74kgs by the handicapper, the Mark Ward, Condobolin trained Gadfly humped 71kgs following a 3kgs allowance for first season jockey Angela Taylor who is a trackwork rider for Warwick Farm trainer Jeff Englebrecht and rode her career first winner at Moree Picnics in late May.

Austin and Zaphod were the leaders in the 1250 metres Cup with Gadfly settling fourth in the eight horse field.Despite the hefty weight, Gadfly ( $6.50 ) took control to win by almost two lengths from Blue Channel ( Caitlin King,$3.50 ) and Austin ( Maddison Wright, $4.60 ) with Rehanaat ( $3.20 favourite ) the winner of the 2017 and 2018 Duck Creek Picnic Cups, finishing fourth.

Ashley Boyd also had a winning double, Lenroy ( $3.20 ) for Bourke trainer James Hatch and Maria Elisa ( $4 ) from the Sharon Jeffries stable at Parkes.

Slowly away, Lenroy rounded up the field to impressively win the Maiden Plate ( 900 metres ) from Bel Twista ( Maddison Wright, $1.90 fav.) and Small Dream ( Michael Wade, $7 ) while from fifth on the turn Maria Elisa made a strong, wide run to account for Vonnida ( Tim Grace, $4 ) and Three Rar ( Angela Taylor, $5 ) in the 900 metres Open Handicap.

This was the fourth win from six starts for Maria Elisa since being trained by Sharon Jeffries.

Forbes trainer Wendy Baker and Hawkesbury based jockey Michael Wade combined to win the Class B Handicap ( 1250 metres ) with Getting Ready ( $4 ) which tracked the leaders before racing to a one and a half lengths win over On A Promise ( Ashley Boyd, $3 ) and Work And Chat ( $2.50 fav.)

More Ransom led for a while in the Class B Handicap ( 1250 metres ) but was no match for the recent Coonamble TAB winner Tapanui.