Cunningham’s IGA has certainly come a long way since the good ole days of Brian Cunningham traversing the countryside in his fruit truck.

The business’ beginnings are as humble as they come, growing from that green fruit truck and blossoming into a successful family-operated supermarket in Clarinda Street.

On August 16 the business will be celebrating its 50th anniversary of operation in the town.

Owners Peter and Janine Boschman and business founders Brian, now 85 years old and Vivienne Cunningham, 83, are inviting the Parkes community to their premises in Clarinda Street for a cake cutting ceremony and morning tea at 11am on the day.

Parkes mayor Ken Keith and his wife Sue will have the honour of cutting the cake.

Vivienne thought it was only fitting to have Cr Keith and Sue cut the cake since the couple has been loyal customers for many years.

“We’ve called on previous mayors to cut the cake on other occasions,” she said.

“We had mayor Jack Scoble cut the cake at an anniversary, we’ve had various over the years.

“Come and say hello [on Wednesday] and have a cup of coffee and a slice of cake.”

Other loyal customers, town crier Tim Keith and Cunningham’s longest serving customer only known as Mrs Webb – who’s in her 90s – will also be making an appearance.

“Mrs Webb has been shopping with us even before we had the shop, so she’s been a customer for probably about 60 years,” Vivienne said.

“She usually doesn’t come in but her son said ‘I’ll see that mum gets here’.”

“It’s unbelievable, time has passed so quickly,” she said.

“My biggest regret is we never kept a record of all the juniors we had at the shop over the years.

“We helped them overcome their shyness...they came in after school or on weekends, we’ve done it for years.”

When they joined the IGA group in 2000, they began taking part in IGA’s Community Chest initiative.

Every year for more than 10 years, Cunningham’s has been donating a portion of their funds, half to Parkes Can Assist and the other half to Currajong Disability Services.

The family and its staff have enjoyed the triumphs and endured challenges that come with working in the supermarket and retail industry – new ventures, expansion, redevelopment, technology upgrades, business awards and new competition.

Over 50 years they’ve seen and experienced it all.

And the Parkes Champion Post has been honoured to have followed them on their journey, covering their milestone moments from the beginning.

Cunningham’s has battled with the competition of Woolworths, Bi-Lo, Franklins and Coles in town, and the latest in October 2013, ALDI.

“We’ve heard all sorts of rumours and had intense competition...And we’ve see a lot of changes.” 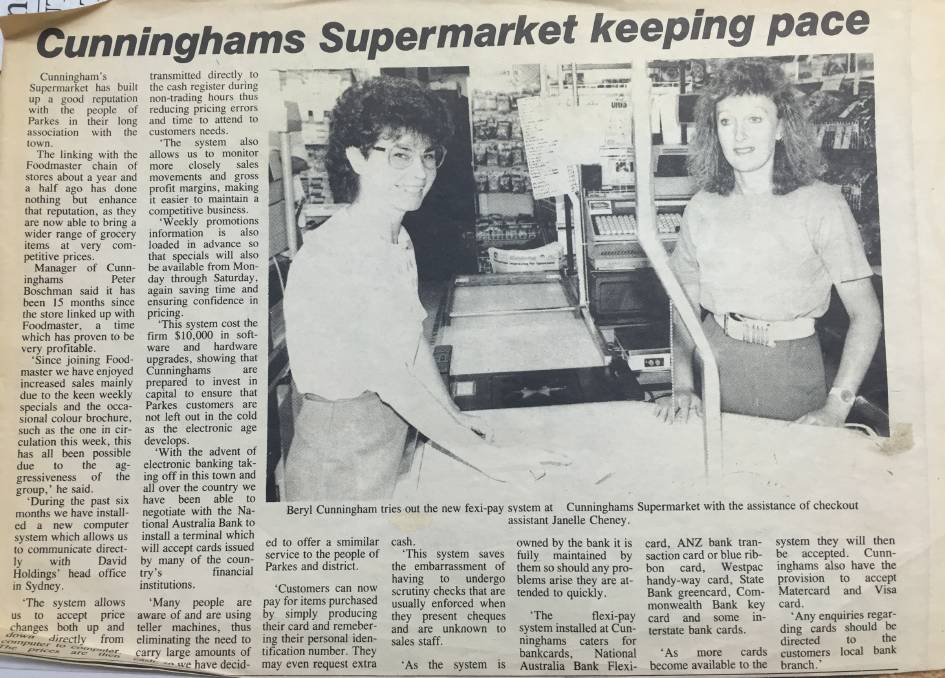 Cunningham's installed a new $10,000 computer system in 1987, allowing them to communicate directly with David Holdings' head office in Sydney.

One change Peter recalled when he first came on board in 1978 was taking and processing stock orders.

“We had a big book and ticked off what we needed once a fortnight, then we’d strip the page out and post it a week in advance,” he said.

“Now all we do is press a button because we have a computerised stock system, which is automatically generated – it comes in on the system and goes out when it’s scanned.”

In 1959 Parkes share-farmer Brian Cunningham started out in the fruit and vegetable trade – travelling around Parkes in his green truck delivering goods door-to-door.

His decision to enter the fruit and veggie game came after a period of trial and error.

The green truck run continued for four years until 1967.

That’s when the real success story began – when Brian realised he could no longer service his town fruit run to its best capabilities.

The Parkes Champion Post reported on August 16, 1967 that his business was making 300 calls on average per week – “the maximum Mr Cunningham could handle under the door-to-door system”, the article read.

In 1967 Brian and his wife Vivienne built a fruit and vegetable stall at 362 Clarinda Street – at the front of the site that is now Cunningham’s IGA.

The stall – a $10,000 venture for the local personalities, which became Parkes’ first “drive-in” fruit mart – opened on August 17, 1967 and was known as Cunningham’s Drive-In Fruit Mart.

A 40 foot by 20 foot shed with a roller door was erected, providing display and counter space at the front, and substantial storage space at the rear, including a $1500 cool room.

During this period, Brian would drive his truck to Sydney two or three times a week to collect the produce that would be sold at the stall.

In summer pumpkins and melons from Forbes were sold.

Brian and Vivienne operated the stall full-time between 1967 and 1974, with three or four employees working on casual or permanent hours.

The first change took place in 1974 when a two storey building was constructed by GC McCabe builders at the site, diversifying the business into grocery lines as well as fruit and vegetables.

This building is the same as it stands on the site 43 years later – though a number of alterations and additions have been made since.

Brian would still travel to Sydney twice a week to collect vegetables in Bankstown.

Grocery companies would send representatives to the Parkes business about once a month, where they created a grocery order for the store.

At the time, there were six or seven full-time employees, as well as a number of casual staff.

The store’s expansion continued into the late 1970s and early 80s, which saw a loading dock and storage shed added to the back of the building in 1976, the office pulled down for more space in 1980 and the back wall of the store room removed in 1984.

In 1983 Cunningham's introduced scanning checkouts, becoming only the 30th store in Australia to do so.

A store room was also added to the right side of the building in 1984 where the drive-through facility once existed.

Another big change for the business came in 1986 when Cunningham’s Supermarket moved into the David Holdings Foodmaster group, prompting a $150,000 renovation.

The renovations included extending display space, a new freezer and freezer room, construction of a new storeroom, installation of a new checkout (worth $15,000) and resurfacing the front car park.

Son-in-law Peter Boschman, who joined the team in 1978 and became owner, told the Champion Post – as reported on December 8, 1986 – “the move will enable us to expand our lines for the ever increasing markets which seem to come up left, right and centre”.

“This is the third and final time that walls will be pulled down,” he said. 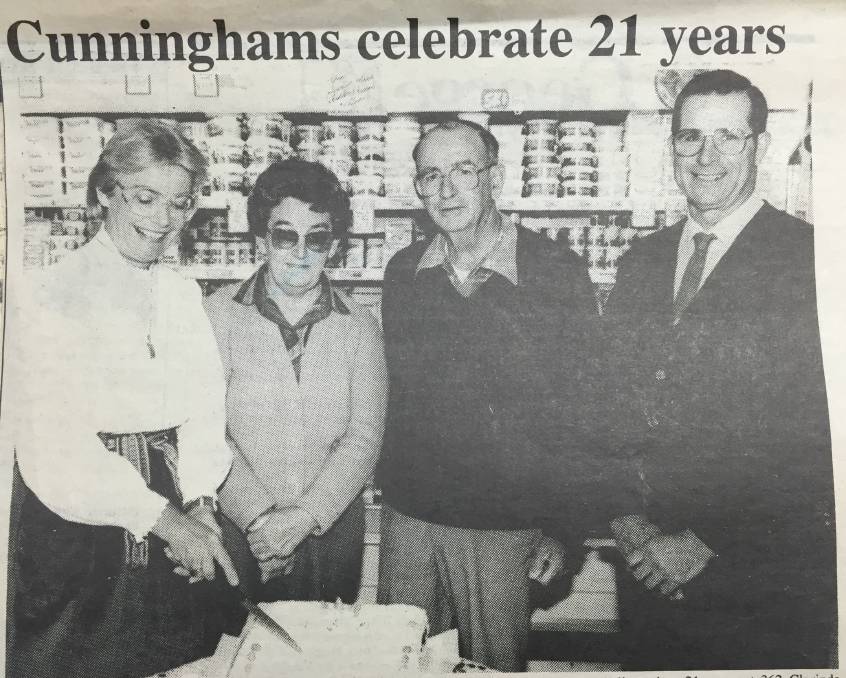 Longstanding customers of Cunningham's Supermarket were Jack and Phyllis Scoble (centre) and Vanessa Arndell, who cut the cake at the business' 21st birthday celebrations in 1988. Also pictured to the right is Brian Cunningham.

Cunningham's entered the electronic age in 1987, installing a new $10,000 computer system that allowed them to communicate directly with David Holdings' head office in Sydney.

The business was also able to offer their customers EFTPOS services with a new fexi-pay system thanks to the National Australia Bank installing a terminal to accept bank cards.

Peter said in an early 1988 Champion Post article that “many people are aware of and are using teller machines… Customers can now pay for items purchased by simply producing their card and remembering their personal identification number. They may even request extra cash”.

“This system saves the embarrassment of having to undergo scrutiny checks that are usually enforced when they present cheques and are unknown to sales staff,” he said.

While Peter may have said in 1986 it was the final time that walls were going to come down at the premises, the actual last physical change made to the store was in 2000 when the back walls were moved again to extend the shop.

And so over the years the store has come under many different banner groups – Supersave, Scoop, Cut Price, Foodmaster, Foodtown and in 2000 IGA.

The special milestones for the business, the family and their staff also continued to roll in.

In October 2004 Cunningham’s celebrated the 30th anniversary of the construction of their premises in Clarinda Street.

For two consecutive years in 2004 and 2005 Cunningham's IGA was named a finalist out of 280 stores in the NSW IGA Produce Merchandiser of the Year Awards.

In November 2005 the business scooped the pool at the Parkes Business Awards, winning their category for More Than 20 Employees and then taking out the grand prize of Parkes’ Most Outstanding Business.

And now, in 2017, Cunningham’s celebrates its biggest anniversary – 50 years almost to the day Brian and Vivienne opened the Cunningham’s Drive-In Fruit Mart in Clarinda Street.